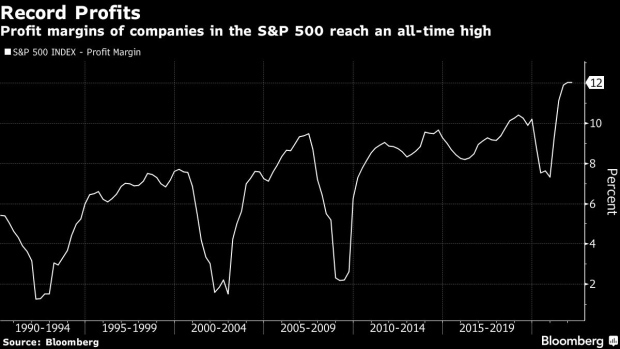 (Bloomberg) -- Economists have largely dismissed the Biden administration’s efforts to blame the inflation surge in part on big companies padding profits, but some warn that these firms could still keep prices higher for longer.

Consumer prices rose 7% in 2021, the fastest calendar-year increase in 39 years, according to government figures released this week. Analysts generally agree on the cause: massive fiscal and monetary stimulus that swelled demand, coupled with supply disruptions and tectonic labor-market shifts triggered by the pandemic -- rather than pricing decisions by big business.

They also concur that the disruptions will ease over the course of the year, returning inflation closer to its muted, roughly 2% pace of the pre-Covid part of the century.

Yet, there are risks that price gains will stick, some economists say. One reason is that corporate consolidation has accelerated during the past two decades, leaving more and more industries across the economy controlled by dominant companies.

The more control a company has in an industry, the more room it has to push up prices and fatten profits. The worry from some quarters is that in moments of general economic disruption, dominant companies can potentially exacerbate price spikes and heap additional pain on American consumers.

“The current CPI only reflects this on the margins, but the contribution will grow over time as companies with market power feel increasingly comfortable raising prices,” said Jeffrey Meli, global head of research at Barclays Plc and the author of a recent report on the impact of Covid-19 on market power.

Before the pandemic, the rise of dominant companies caused concern among economists and policymakers that weak competition was contributing to other problems, such as growing inequality, falling business dynamism and a decline in worker power and income share. Now, an emerging fear is that companies with market power are exacerbating inflation driven by supply-chain distortions caused by Covid-19.

Take a look at Coca-Cola Co. and PepsiCo Inc., which raised prices within days of each other in July and subsequently recorded substantial margins. Or the meatpacking industry, where Biden is trying to curb the power of conglomerates like JBS SA and Tyson Foods Inc. Meat prices rose nearly 15% last year.

“You’re left with a couple of giants in each industry,” said Jan De Loecker, a professor at KU Leuven in Belgium. “Then this crisis happens, demand contracts, and because these other guys are no longer there to create competition, they can do whatever they want.”

Others argue that the link between price increases and market dominance is weak. Concentration in U.S. industries has been rising steadily since around 2000, but inflation has been stubbornly low in that time period.

Another counterpoint is that by breaking up industry giants, antitrust officials risk unraveling market efficiencies that help keep prices low. And when there are only a few employers in town, workers have less opportunity to bargain for higher pay, another disinflationary force.

A survey of a group of economists published by the University of Chicago Booth School of Business this week showed most don’t believe that a “significant factor” behind higher inflation today is dominant companies using their market power to raise prices. Three winners of the Nobel Prize in economics, however, disagreed.

Surging profits at some firms show how price increases are contributing to higher margins. Three months after they raised prices to offset higher input costs, PepsiCo registered more than $3 billion in operating profits and Coca-Cola posted a 28% profit margin. Both have said since they’ll continue to raise prices.

A representative for Coca-Cola said the company adjusts its pricing to balance “premiumization and affordability,” while PepsiCo declined to comment.

The Biden administration often points to meat processing giants Tyson and JBS, saying that if price hikes were the result of rising costs, profit margins would be flat. Both reported gross margins of around 20% in the fourth quarter, some of the highest ever. Meatpackers deny they’re exploiting their market position to raise prices, arguing that labor shortages and strong demand are to blame for higher costs and lower production.

In a confirmation hearing for Federal Reserve Chair Jerome Powell’s renomination Tuesday, Senator Elizabeth Warren -- who’s long been critical of technology giants -- pressed him on the relationship between market concentration and higher prices. Powell said price increases can be attributed in part to strong demand, and added that big companies are charging more “because they can.”

Companies in the S&P 500 Index are reporting record profit margins despite rising costs, helping the benchmark surge 27% last year. Some companies are touting their ability to charge higher prices.

Norwegian Cruise Line Holdings Ltd.’s Chief Executive Officer Frank Del Rio told analysts on the company’s earnings call in November that he expects higher margins despite inflation pressure because “we’ve got that pricing power that is translating into high yield.”

The challenge for antitrust cops at the Justice Department and the Federal Trade Commission is that it’s not illegal in the U.S. for a company to hold a monopoly position or take advantage of its market power to raise prices.

Companies are free to follow a rival’s price increase with their own -- especially if there’s no competitive threat to keep price hikes in check. That’s why antitrust enforcers are tasked with preventing markets from consolidating before it’s too late.

The Fed is fighting the inflation battle by withdrawing monetary stimulus at a faster pace than initially planned, opening the door for earlier rate hikes, possibly as soon as March. However, companies with market power are less affected by higher interest rates, which risks making it harder for the Fed to tamp down inflation, according to a July paper from the International Monetary Fund.

That’s why the latest inflation spike could prove to be more persistent, especially if fed by big business, Barclays’s Meli said.

“The longer inflation lasts and the more widespread it is, the more air cover it gives companies to raise prices,” Meli said. “It feeds on itself.”