Canadian businesses are facing unprecedented challenges meeting demand, along with elevated expectations for wages and inflation that will bolster bets for aggressive rate hikes from the Bank of Canada.

The central bank’s quarterly survey of executives paints a picture of an economy still pressed up against its limits. Four-fifths of companies said they would have at least some difficulty meeting unexpected demand, a record. About 70 per cent of respondents expect annual consumer price gains to surpass 3 per cent over the next two years, also a record, with reports of higher expected wage growth pervasive.

The rising cost and inflation outlook will only cement bets that the Bank of Canada is poised to drive up borrowing costs sharply in coming months. Markets are pricing in a nearly 80 per cent chance the central bank will hike its policy rate -- currently at 0.5 per cent -- by half a percentage point at its April 13 decision, and raise it to as much as 3 per cent by this time next year.

That would represent one of the quickest tightening cycles in the past three decades. 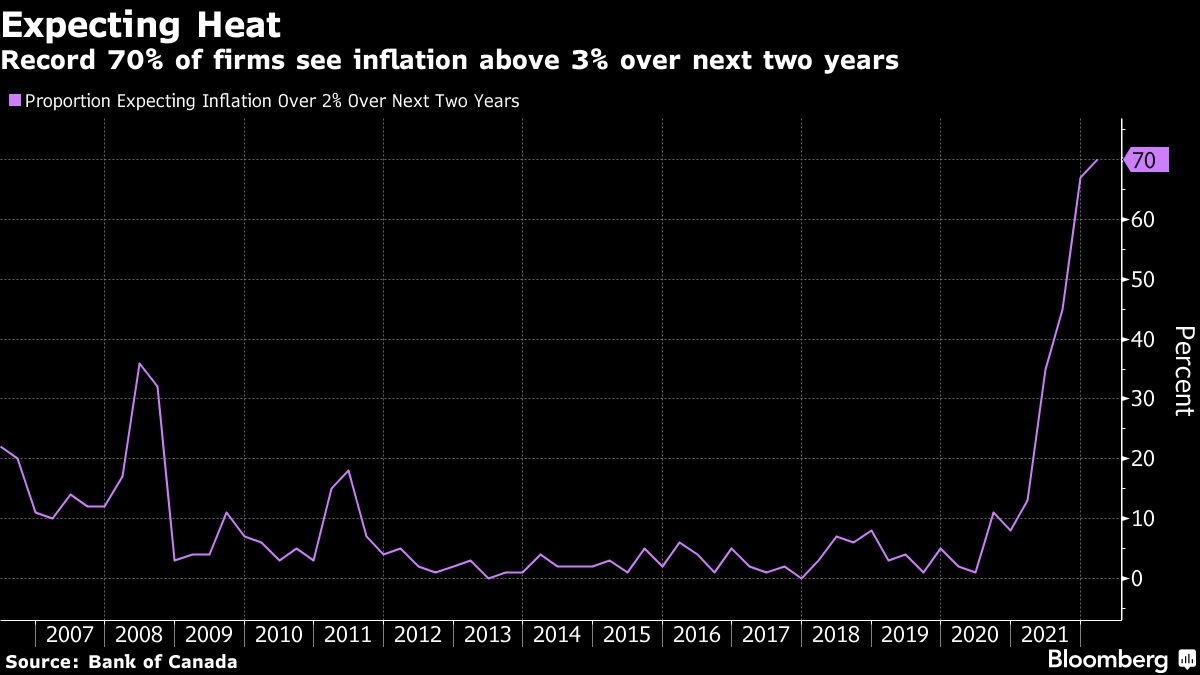 “The number of firms reporting capacity pressures related to labor or supply chain challenges is at a record high,” the Bank of Canada said in the release. “Because of persistent capacity pressures and strong demand, firms expect significant growth in wages, input prices and output prices.”

“If we still needed to cement the case for a half point rate hike in April, the Bank of Canada’s Business Outlook survey provided it,” Avery Shenfeld, chief economist at Canadian Imperial Bank of Commerce, said in a report to investors. “The near term inflation pressures highlighted in the survey are what make a 50 basis point move in April look like a reasonable step at this point.”

A broad gauge of business sentiment fell slightly from record levels, in part because sales growth is expected to slow. The central bank’s composite indicator of business conditions fell to 4.98, from a record high 5.90 in the fourth quarter.

About half of companies surveyed said they expect sales growth to decline over the next 12 months, and indicators of future sales are easing. But sales remain strong, the Bank of Canada said. Expectations for investment in machinery and equipment and hiring also remain elevated, though down from the end of last year.

The survey did show, however, increased expectations for input costs, pricing and wages. About 46 per cent of firms see an acceleration in input inflation, while 51 per cent expect output price increases to accelerate. Average expected wage increases are seen at 5.2 per cent, a record.

This survey was conducted from Feb. 7 to Feb. 25, though the Bank of Canada did follow-up interviews last month to ask about Ukraine.

Still, the survey found that most businesses expected inflation to eventually return to target.

A separate survey of consumer expectations showed Canadian households also expect inflation to stay above 3 per cent over the next couple of years. Asked what they expect the rate of inflation to be in the future, Canadians saw it at 5.07 per cent in the next year and 4.62 per cent in two years. That’s higher than three months ago. Within five years, inflation is seen at 3.23 per cent, which is down from the previous survey.