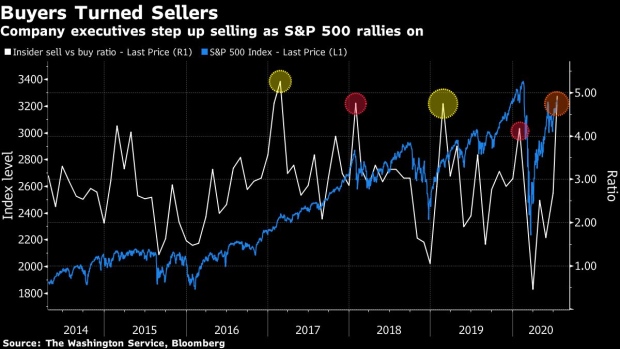 A trader types on a keyboard while monitoring financial data figures on the last day of trading of the year inside the Frankfurt Stock Exchange, operated by Deutsche Boerse AG, in Frankfurt, Germany, on Friday, Dec. 28, 2018. European shares rallied, while Asian stocks were mixed and U.S. equity futures held steady on Friday as traders struggled to make sense of wild price swings in the final sessions of the year. Photographer: Alex Kraus/Bloomberg , Bloomberg

(Bloomberg) -- As U.S. stocks climb to their most expensive levels in two decades, the executives in charge of the companies benefiting from the rally are showing signs of anxiety.

Corporate insiders, whose buying correctly signaled the bottom in March, are now mostly sellers. Almost 1,000 corporate executives and officers have unloaded shares of their own companies this month, outpacing insider buyers by a ratio of 5-to-1, data compiled by the Washington Service showed. Only twice in the past three decades has the sell-buy ratio been higher than now.

Data from InsiderInsights.com showed a similar trend. Over the past four weeks, companies with insider selling have outnumbered those with buying by 186%, approaching the 200% level that has tended to mark short-term market tops in the past decade, according to Jonathan Moreland, the firm’s director of research.

The pickup comes after stocks rebounded from the bear-market selloff, lifting the S&P 500 more than 45% from its March low. Now, with tech stocks at all-time highs even as a pandemic and recession rage, some executives are lightening up.

While some analysts have warned against reading too much into insider sales because factors other than valuations can influence the action, a similar spike this year and in 2018 foreshadowed equity losses.

“Our indicator is now flashing a warning sign,” Moreland said. “I’m not prepared to say everybody should sell everything and short the market because of the recent insider data. The way I’m using it is, I’m more comfortable selling some of my winners. We still don’t trust the market’s recent recovery.”

UnitedHealth Group Inc. Chairman Stephen J. Hemsley and Morgan Stanley Chief Executive Officer James Gorman are among insiders that have sold shares of their own companies this month.

Executives were one of the few groups daring enough to go bargain hunting during the market rout in March. Back then, they scooped up shares at the fastest pace in nine years as stocks plunged into the fastest bear market on record.

Now, fewer than 200 corporate insiders have bought shares in July, compared with a full-month average of 1,160 during the first half of this year, Washington Service data show.

In terms of total value, insiders sold $52.6 million of shares last week while their purchases reached $3.4 million, according to data compiled by Bloomberg.

Corporate insiders has shown a mixed track record in timing their stock disposals. Their rush to sell at the start of this year proved prescient as the S&P 500 rose to an all-time high in February before crashing. So did the selling spree in January 2018, when the benchmark index’s advance to what was then a record preceded a correction. The dash to bail in 2017 and 2019, however, was met by continued equity gains.

“When the market is trading as it is, very close to all-time highs, it gives the optics that insiders don’t believe the market being at these levels,” Robert Pavlik, a senior portfolio manager at SlateStone Wealth, said by phone. “It presents the appearance that they think their stocks are overvalued. It may be true, but there is no definite way to tell.”

Open-market stocks sales, excluding those set up through 10b5-b programs or related to options, that are reported in Bloomberg data in July include: