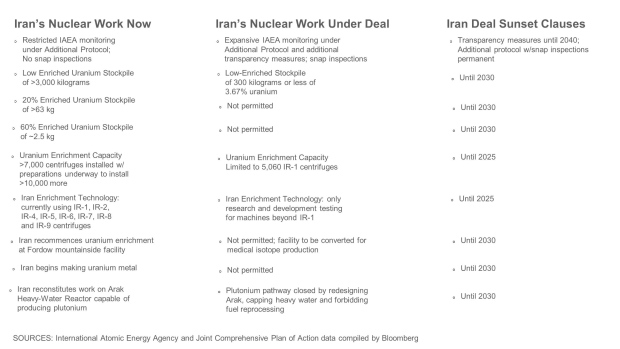 (Bloomberg) -- World powers and Iran will try reviving their landmark nuclear accord one last time before voters in the Islamic Republic head to the polls next week to elect a new president who’s likely to be less willing to make concessions to the West.

Diplomats have been filtering in to Vienna for a sixth and possibly final round of negotiations starting Saturday. At stake is the 2015 agreement that capped Iran’s nuclear activities in exchange for the lifting of sanctions. Then-President Donald Trump jettisoned the accord three years ago and unilaterally reimposed punishing penalties, prompting Iran to dramatically increase its production of nuclear fuel.

The negotiations are being closely watched by oil markets as a deal would remove U.S. sanctions on Iranian exports. Agreement in Vienna could also help calm the Middle East, after the standoff between Tehran and Trump’s Washington fueled regional conflicts and coincided with a spate of unclaimed attacks on shipping.

Plenary talks between China, France, Germany, Iran, Russia and the U.K. are expected to convene on Saturday. Enrique Mora, the European Union’s deputy foreign policy chief who’s coordinating sessions, is charged with shuttling messages and instructions between delegates and Washington envoy Robert Malley as long as the U.S. formally remains outside of the accord.

European diplomats have been warning for weeks that resurrecting the deal could become more complicated if an agreement isn’t struck before Iran’s presidential election on June 18.

Asked if one week is enough time to reach a deal, assuming there’s a will on both sides to do so, State Department spokesman Ned Price told reporters Thursday that “big issues” continue to divide the sides.

“We are moving at a pace that is consistent with our desire to see Iran’s nuclear program once again restricted and to see Iran, once again, subject to a permanent and verifiable ban on ever obtaining a nuclear weapon,” he said.

Previous deadlines set for mid-May and the start of June were missed after sides remained deadlocked over the scope and timing of sanctions relief, as well as the possibility of follow-on talks about regional security.

An Iranian government spokesman said this week that the country’s approach toward restoring the deal won’t change after President Hassan Rouhani, who championed the accord, leaves office in August. But he’s widely expected to be succeeded by conservative cleric Ebrahim Raisi, who’s generally seen as hostile to engagement with the U.S.

Mora told delegates after adjourning the last round of negotiations that both the U.S. and Iran needed to make “hard decisions” that could ruffle domestic political constituencies.

Members on both sides of the aisle in Congress remain adamantly opposed to the accord, making it harder for the Biden administration to lift non-nuclear-related sanctions -- as demanded by Iranian lawmakers -- before Tehran rolls back the advances in its enrichment program.

U.S. Secretary of State Antony Blinken told the Senate Foreign Relations Committee on Tuesday that Iran’s nuclear program is “galloping forward” in the absence of an agreement. Iran, home to the world’s No. 2 natural gas and No. 4 oil reserves, began enriching uranium close to the levels needed for nuclear weapons in April and its stockpile of fuel has been growing at an alarming rate.