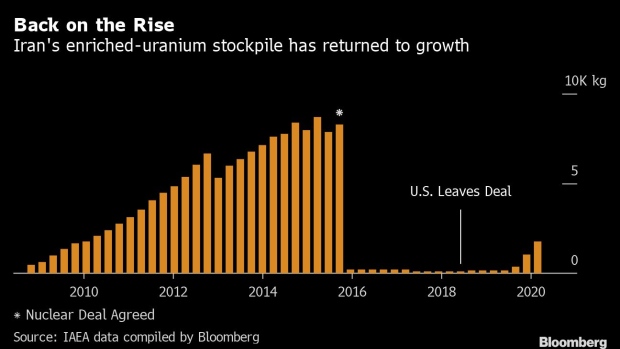 (Bloomberg) -- An explosion at one of Iran’s critical nuclear sites won’t significantly set back its enrichment of uranium, the essential fuel for atomic energy and weapons. But it could collapse the remaining pillar of the 2015 accord meant to contain the program -- international monitoring.

That’s the assessment of past and present arms-control analysts who’ve been tracking the fallout from the July 2 blast that destroyed a centrifuge workshop at the Natanz installation. They expect pressure to mount on International Atomic Energy Agency inspectors, one of whom was briefly detained last year after being accused by Iran of spiriting explosive material into Natanz. The U.S. rejected that claim as attempted intimidation.

“The big benefit that Europe and the U.S. continue to receive from the JCPOA is the intelligence they get from IAEA on-the-ground monitoring,” said Ellie Geranmayeh, who advises policy makers at the European Council on Foreign Relations, using an abbreviation for the pact between Iran and world powers struck five years ago on Tuesday.

“As a result of Iran being on its guard, there are more conversations about access and posture toward the IAEA,” she said. “This may not bode well for how cooperative it will be in the coming months.”

The scale of the Natanz explosion, which came shortly after another at a military site near Tehran, triggered speculation that Iran’s regional adversary Israel might have targeted the facility. Several years ago, the Stuxnet computer virus unleashed against Iran’s nuclear program was attributed to both Israel and the U.S.

Israel declines to respond to such allegations as a matter of course. Asked whether the Israeli government was concerned about retaliation given the rumors, Intelligence Minister Eli Cohen advised Iran “not to underestimate our determination. They know what we are capable of.”

Whatever happened at Natanz, a further unraveling of the nuclear deal would be welcomed by Israeli Prime Minister Benjamin Netanyahu and the Trump administration. They are longstanding opponents of the agreement, which curbed Iran’s nuclear activities in exchange for sanctions relief. The JCPOA began to unwind after President Donald Trump withdrew the U.S. from the deal in May 2018, reimposing sanctions and prompting Iran to begin reconstituting its uranium stockpile.

Under the accord, the IAEA won the right not only to call snap inspections, but also to monitor the assembly of Iran’s enrichment machinery. The agency is denied access to such sites in almost all other countries because the intellectual property embedded in the centrifuges is considered a state secret, according to former IAEA director Robert Kelley.

“The explosion shows that Iran had an incredible security lapse,” said Kelley, who also worked in U.S. nuclear-weapons laboratories for three decades. “But their production of material is inexorable and steady and predictable and this doesn’t change anything in the short term.”

Iran has declined to disclose the source of the blast for “security reasons” while pledging retaliation against any actors involved. The country already put inspectors on notice last month that continuing to pile on pressure could result in less access to the places IAEA wants to visit.

Iran is sitting on thousands of extra centrifuges sealed by IAEA inspectors in 2015, when the country voluntarily gave up enough enriched uranium to construct more than a dozen bombs. Iran has always denied it seeks nuclear weapons. But under pressure from the Trump administration, the IAEA’s relationship with Tehran has become increasingly fraught as inspectors try to reprise past probes into alleged weapons work.

“The IAEA is conducting safeguards verification activities as before at the Natanz uranium enrichment facility,” an agency spokesman said on Monday when asked whether inspections had returned to normal after the blast.

Monitors began raising alarms about Iran advancing its centrifuge-research activities around the same time the inspector was detained for allegedly triggering explosive-detection alarms at Natanz on Oct. 28. Less than two weeks later, the IAEA reported that Iran “had prepared a new location, beyond those specified in the JCPOA, for mechanical testing of centrifuges.”

The existence of a third workshop in Iran, in addition to the damaged site at Natanz and a research center in Tehran, suggests that the country’s engineers may easily transition to a new location. Iran still hadn’t begun mechanically testing advanced centrifuges at its newest facility as of May 18, according to the most-recent inspections report.

“The various advanced centrifuge models that Iran is developing now have a much higher uranium enrichment capacity than the first generation,” said Raphael Ofek, who served as a senior Israeli intelligence analyst and is an expert in nuclear physics and technology. “It is of great significance to halt their development.”