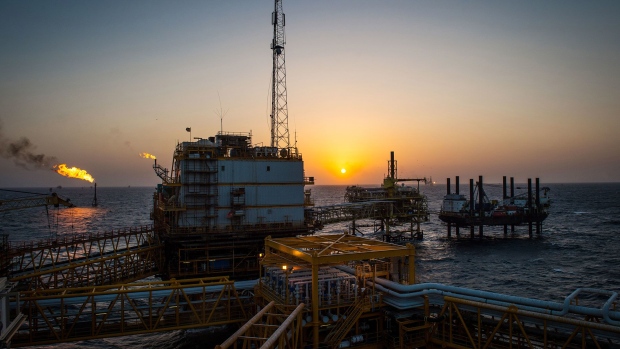 Gas flares burn from pipes aboard an offshore oil platform in the Persian Gulf's Salman Oil Field, operated by the National Iranian Offshore Oil Co., near Lavan island, Iran, on Thursday, Jan. 5. 2017. Nov. 5 is the day when sweeping U.S. sanctions on Irans energy and banking sectors go back into effect after Trumps decision in May to walk away from the six-nation deal with Iran that suspended them. , Bloomberg

Iran’s oil exports have fallen in recent months amid increased competition from Russia in the key market of Asia, according to people with direct knowledge of the Islamic Republic’s sales.

Tehran’s daily crude exports have dipped from a peak of 1 million barrels to an average of 750,000 barrels, according to the people, who asked not to be named as the information is private.

Iranian shipments are going head to head with those from Russia in countries such as China, prompting Tehran to regularly review and adjust its prices to stay attractive, they said.

The US has heavily sanctioned Iran and its oil sector. That and the extra Russian barrels have forced Tehran to offer buyers discounts. Its cargoes -- most of which go to China --- are often disguised as coming from other nations.

Moscow is trying to ramp up sales to Asia after Europe retaliated against its invasion of Ukraine with sanctions. Chinese private refiners, or teapots, have increased purchases of Russian grades such as ESPO and Urals, which are also sold with discounts.

Iran is supplying its local refineries with 2.1 million barrels a day of crude oil, meaning the country’s total production is roughly 2.8 million barrels a day, said the people. It will be ready to raise exports if and when its 2015 nuclear deal with world powers including the US is revived, they said.

Negotiations over the so-called Joint Comprehensive Plan of Action -- which eased sanctions on Iran in return for it curbing nuclear activities -- have stalled in recent weeks. Most analysts doubt it will be restored before the US mid-term elections in November.

Tehran has a production capacity of 4 million barrels a day and would like to lift that to 5.7 million, Oil Minister Javad Owji said to Nikkei in an interview on Sunday.