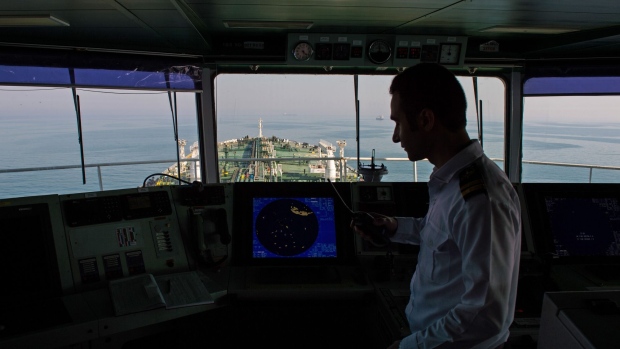 A crew member prepares the bridge for the sailing of oil tanker 'Devon' sails to transport crude oil to export markets in Bandar Abbas, Iran, on Friday, March 23, 2018. Geopolitical risk is creeping back into the crude oil market. Photographer: Ali Mohammadi/Bloomberg , Bloomberg

(Bloomberg) -- Iran is reaching out to its old customers in Asia to gauge interest in its crude as the Persian Gulf oil producer ramps up diplomacy in a bid to get U.S. sanctions lifted.

At least five refiners across the region have been approached by National Iranian Oil Co. -- the state oil marketer -- to discuss the possibility of buying crude if sanctions are eased, according to people familiar with the matter. Talks are preliminary, with no discussion on volumes or prices just yet, they said, asking not to be identified because the information is confidential.

One processor has been contacted twice so far this year after having no interaction with the OPEC producer at all in 2020, according to one person. The Iranian oil ministry in Tehran declined to comment on the matter.

Iran’s crude shipments dwindled to a trickle after sanctions by the former U.S. administration in 2018 and the end of waivers for some countries in 2019, although a number of Chinese refiners continued to take some oil. Prior to the penalties -- put in place to pressure the country into renegotiating a nuclear deal -- China and India were Iran’s biggest buyers in Asia, followed by South Korea and Japan.

Citigroup Inc. has described Iran as the biggest wildcard for the oil market this year, although there’s no certainty a deal will materialize anytime soon that would lead to rising exports. President Joe Biden has offered to participate in talks to revive a nuclear accord, but Tehran wants U.S. sanctions to be lifted first. Europe said recently it will be more active to revive the pact.

While Iranian oil exports are still subject to sanctions, shipments have been creeping up and flows to China have received some unwanted attention recently. India is also hoping Biden will take a softer line against Iran so that the world’s third-largest oil importer can diversify its crude sources.

China continued to import Iranian oil after Beijing opposed the sanctions and accused the U.S. of reaching beyond its jurisdiction. The U.S. claims Iran disguises the origin of its crude to skirt the sanctions and Washington recently seized 2 million barrels of crude aboard a Greek tanker, saying the owner was deceived into thinking the oil came from Iraq.