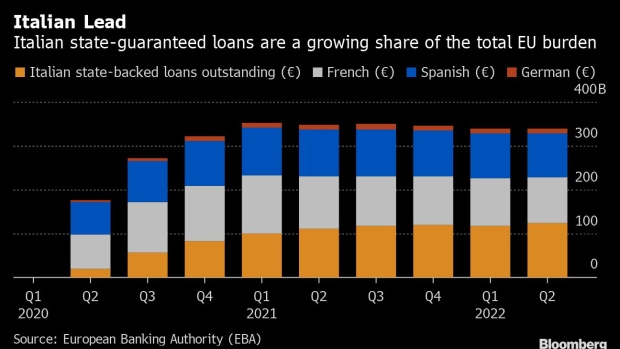 (Bloomberg) -- While much of Europe Inc. is shrinking state-backed loans from the pandemic, Italian companies are still sitting on mountains of such borrowings, complicating government efforts to help them surmount the latest crisis: soaring energy costs.

Italian companies had a record €123.2 billion ($127 billion) of Covid-era state-backed credit lines outstanding as of June 30, up from €118 billion in the previous quarter, according to a European Banking Authority report published last month. The country has the most government-guaranteed debt yet to be repaid in the euro zone, even though it’s not the region’s largest economy.

That’s putting the newly formed government of Giorgia Meloni in a quandary: how and to what extent can it keep supporting companies now grappling with higher costs, especially energy bills, in a rapidly slowing economic environment? The government is implementing an aid package allowing companies to spread out their energy bills over as many as two years, and providing gas and electricity suppliers a 90% state-backed guarantee on their exposure to the rescheduled bills.

Any additional support for companies in the form of debt just postpones the pain, leaving them with heavily indebted corporate structures that could become unsustainable if revenue and profits are hit in a recessionary environment, warns Stefano Caselli, the dean of SDA Bocconi School of Management in Milan.

“We are on very thin ice,” he said. “If the system enters a recession and tensions on energy prices stay high, the debt of companies will become a problem. ”

The International Monetary Fund forecasts that the Italian economy will contract 0.2% in 2023.

The state-guaranteed pandemic loans were granted in 2020 as the coronavirus brought sudden and widespread disruption to businesses worldwide and corporates urgently needed inexpensive sources of liquidity. But now, in an era of higher interest rates and slowing growth, many Italian companies are finding that the borrowings are hard to replace or pay back. Some are even failing to meet the conditions attached to their loans.

For instance, toy company Giochi Preziosi SpA in 2020 obtained an €85 million loan from banks, 90% of which was guaranteed by the Italian state. Earlier this year, the banks had to grant the company a waiver because it wasn’t able to meet the covenants attached to the credit lines, according to its latest annual report. The company also flagged potential risks to its operations from a prolonged recession.

“Looking back at what was done in the coronavirus years, what they missed was the conviction to go down a capitalization route for companies, instead providing them with new debt,” said Caselli. “The issue with Italian corporate debt is the scarcity of equity on balance sheets.”

Each European Union member-state developed its own public-guarantee plan for the pandemic.

In Italy, the framework -- called Garanzia Italia -- required companies to apply for a financing line from a bank, which would then request a state guarantee through the export credit agency SACE SpA or state bank Mediocredito Centrale - Mezzogiorno SpA. Once it got the green light, the lender would grant the facility.

The guarantee covered between 70% and 90% of the new credit lines. Italy has the largest percentage covered by the state guarantee, or 84.8% of the total loans issued versus 78.9% and 65.8% in Spain and France respectively, according to the EBA report. Collectively, Italy, Spain and France account for about 90% of the state-guaranteed loans still outstanding across the EU.

Guarantees were offered to companies across the credit spectrum, even junk-rated ones. Banks were willing to supply credit lines knowing they’d be covered for a great majority by the state. Intesa Sanpaolo SpA, UniCredit SpA and Banco BPM SpA are among banks with the biggest exposures.

“There are still certain concerns about the asset quality of these exposures, but for banks it may be less of an issue because of the guarantees,” said Andreas Pfeil, a senior bank sector analyst in the Economic and Risk Analysis department at the EBA, and the author of the report.

So the key question now is when and how will all this debt be repaid.

“There is an increasing recognition by governments that some of these loans will have to be restructured, the simplest way being extending the maturities,” said Justin Holland, a managing director at DC Advisory. “A lot of it will depend on where the loan is ranked and where it sits within the capital structure.”

In Italy, such loans rank high in the capital structure, meaning that they have a priority of payment versus other debt in a restructuring scenario. There have been proposals from experts about developing a framework for their treatment in case of deterioration, but there’s no concrete policy so far, a Milan-based restructuring lawyer said.

The two entities issuing the guarantees, SACE and Mediocredito Centrale, are not equipped to manage any deteriorated loans. So servicer AMCO-Asset Management Co SpA, owned by the Italian Finance Ministry, is working on a platform called Progetto Glam through which banks can offload the guaranteed loans to the debt-management agency. The project has yet to be finalized.

Granted, there’s no great rush. The corporates don’t face an imminent maturity wall. A majority of the state-guaranteed debt comes due after 2024, according to a separate EBA report.

“We are in a moment of tension, interest rates are increasing and we are heading into a period where the pressure on companies will keep growing and where the financing element will weigh more,” said Carlo Massini, a Milan-based partner at Hogan Lovells. “For now, there’s not an immediate alarm when it comes to repayments.”

But Italy will need to eventually confront the issue.

--With assistance from Alessandro Speciale.