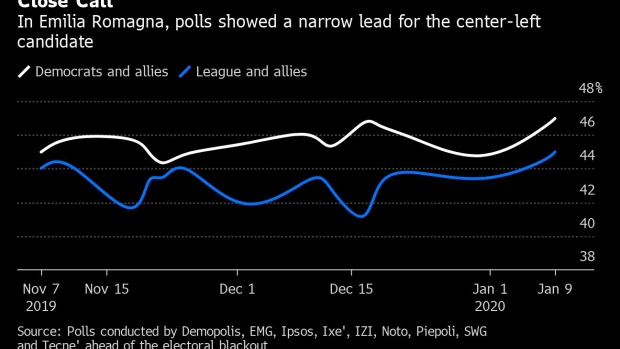 (Bloomberg) -- Investors are viewing a Sunday regional vote in Italy as a key test on how long the rocky ruling coalition of the Democratic Party and the Five Star Movement can survive.

The opposition League party led by Matteo Salvini is looking to snatch control of the center-left stronghold of Emilia Romagna, one of two regions voting over the weekend.

A victory there would bolster Salvini’s case for snap national elections he’d likely win. It is a popularity contest that’s become even more significant following the resignation of the leader of Five Star, the biggest party in the government.

While Salvini’s party continues to ride high in the polls, opinion surveys show support for Five Star has cratered. Here’s what you need to know.

About 3.5 million people in Emilia Romagna and more than 1.5 million in the southern region of Calabria will elect governors and regional assemblies.

In prosperous Emilia Romagna -- a region historically dominated by the left -- polls have shown a virtual tie between the League and the center-left, with the latter holding the narrowest of leads in final surveys conducted before an electoral blackout period.

Pre-blackout polls have pointed to a clear lead for a center-right coalition in Calabria.

Though less symbolic than the leftist bastion in Emilia Romagna, a center-right win in Calabria would still be notable for Salvini, who fronts a party that once denigrated the south and called for northern Italy to secede.

Will the government collapse if Salvini wins?

Probably not, at least not right away. The parties backing Prime Minister Giuseppe Conte insist that regional votes don’t have any impact on national politics. But a defeat in Emilia Romagna would be particularly hard to swallow for the Democrats, who might then begin rethinking whether their governing alliance with Five Star is really worth it.

Brace for more turbulence in case of a League triumph but keep in mind that the government may actually grow stronger if the coalition parties become weaker. The glue holding them together is, after all, their shared desire to avoid snap elections that would put Salvini in power.

What do markets say?

Most analysts share the sanguine assessment that, in the short term, the government won’t be directly affected by the outcome of this vote. However, they also highlight the concern that a weakened Conte will be even less capable of carrying out reforms that Italy’s stagnant economy desperately needs.

When to tune in?

Once polls close, Italy’s state-run Rai television will publish exit polls, though it’s possible they won’t immediately point to a clear winner. After midnight, projections based on actual vote counts should start giving a clearer picture.

The winner will likely be declared in the early hours of Monday morning and full results will come that day.

--With assistance from Samuel Dodge.

To contact the reporter on this story: Alessandro Speciale in Rome at aspeciale@bloomberg.net

To contact the editors responsible for this story: Chad Thomas at cthomas16@bloomberg.net, Jerrold Colten, Caroline Alexander