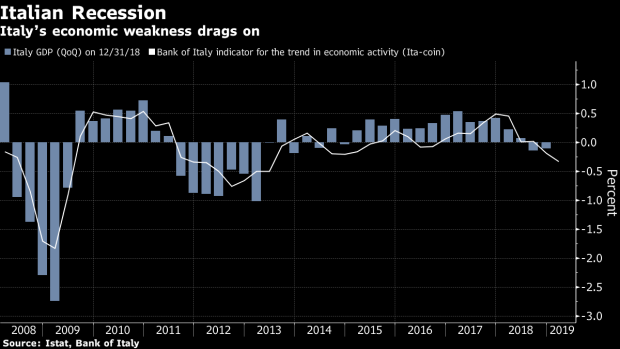 (Bloomberg) -- Italy’s political and business elite was in a somber mood at a lakeside gathering where attendees lamented the measly prospects for economic growth under the country’s populist coalition.

Almost a year into the fractious partnership of the League and the Five Star Movement, grandees meeting in northern Italy reacted with dismay to a Bloomberg report that the Treasury is set to slash its growth forecast for this year and raise its projected budget deficit.

“If we don’t return to a serious path of growth, we’re not going to get our way out of debt,” Luigi Zingales, finance professor at University of Chicago Booth School of Business, said in an interview at the event at Lake Como. “Of course the international context can help or damage. But the problem of Italy is that when things are great, we do O.K., and when things are not great we do a disaster.”

Amid a global economic slowdown hurting the country’s export prospects, the government is expected to say the economy will barely grow this year, with expansion of just 0.1 percent instead of a previous forecast of 1 percent, according to two senior officials. Rome aims to achieve expansion of 0.3 percent or 0.4 percent with a series of measures to boost output included in the so-called Growth Decree approved by the cabinet late Thursday.

That outlook followed a visit by European Commission President Jean-Claude Juncker to Rome this week, when he said that he wants “extra efforts to maintain growth” and warned that the economy “hasn’t stopped regressing.”

For former premier Mario Monti, who led a technocratic government seeking to stabilize Italy’s prospects long before the country’s politics spawned a populist experiment, the coalition represents a constant danger to an economy lumbered with the region’s biggest debt hoard.

“These are two parties with very different ambitions and for each of them delivering on their electoral promises is apparently much more important than the outcome of that on the economy,” Monti told Bloomberg Television’s Francine Lacqua on the sidelines of the European House-Ambrosetti forum. “So this is a very unsettling framework.”

There was a brief respite from the gloom on Friday as Istat, the county’s statistics institute, said that its leading indicator for March suggested a potential end to the economy’s contraction was in sight.

But even if the economy does stop shrinking, for Enrico Letta of the center left, another ex-premier, the coalition looks set to remain a constant liability.

“To have growth you need investments -- you need to attract investments,” he told Bloomberg Television. “The key point is the fact that there’s a big mistrust, a lack of confidence.”

--With assistance from Flavia Rotondi.