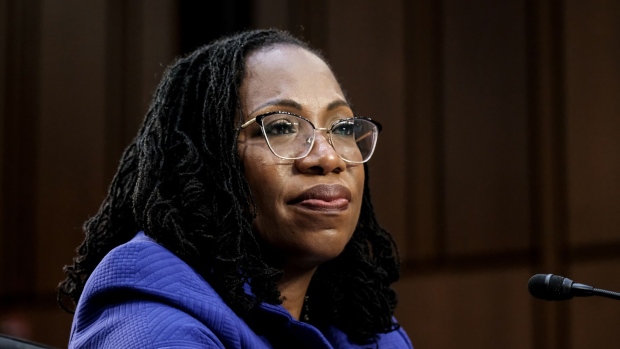 Ketanji Brown Jackson, associate justice of the U.S. Supreme Court nominee for U.S. President Joe Biden, arrives to a Senate Judiciary Confirmation hearing in Washington, D.C., U.S., on Monday, March 21, 2022. Jackson will make history today as she goes before a Senate panel considering her nomination to be the first Black woman on the U.S. Supreme Court. , Bloomberg

(Bloomberg) -- Judge Ketanji Brown Jackson will suddenly find herself with a lot of time on her hands if the Senate fulfills expectations and confirms her to the U.S. Supreme Court this week.

The busiest six weeks of Jackson’s life are likely to turn into a three-month wait once she wins approval to occupy a Supreme Court seat that won’t open until late June or early July. Justice Stephen Breyer said in January he will retire when the court’s current term ends.

It will be an unprecedented position, created by the timing of Breyer’s retirement announcement coupled with Democrats’ decision to put her confirmation on a relatively fast track. Jackson now serves on a federal appeals court in Washington, though she has put her work there on hold since her Feb. 25 nomination.

Previous justices have typically had only a few days after winning confirmation to start working on the nation’s highest court.

The Senate is scheduled to vote on Jackson’s nomination as early as Thursday. Three Republicans have said they would join the chamber’s 50 Democrats in supporting her, guaranteeing confirmation. But the first Black woman justice won’t start hearing arguments until the next term begins in October.

The justice-in-waiting hasn’t said how she’d spend the next three months, though she will almost certainly devote time to hiring law clerks and deciding how she will run her chambers.

She may also be due for a long vacation after a demanding confirmation process that didn’t stop once she finished her Senate testimony March 23. Since then, she has met with at least 16 senators and answered 1,154 written questions, many of them multipart, from Republicans on the Senate Judiciary Committee.

Although Jackson can remain on the appeals court until Breyer retires, she may not have a lot of work to do there as her time winds down. She’s unlikely to take on any new cases because she would then have to recuse from those matters should they get appealed to the Supreme Court.

And it’s not clear she will play any role in cases that have already been assigned to her. Like previous nominees, she hasn’t participated in rulings since her nomination, even for cases in which she heard arguments.

Each of last three justices to join the Supreme Court -- Amy Coney Barrett, Brett Kavanaugh and Neil Gorsuch -- was sworn in with a term in progress. Barrett heard her first argument a week after being confirmed in 2020. She heard eight cases during her first two weeks, all by phone because of the coronavirus pandemic, including a major challenge to the Affordable Care Act.

“I was scrambling,” Barrett said in a public appearance this week at the Reagan Library in Simi Valley, California. “I had to set up a chambers and hire staff and get up and running on the oral arguments, read the briefs.”

Kavanaugh had even less time in 2018, taking the bench three days after his Senate confirmation capped a bitter fight over accusations he had committed sexual assault decades earlier as a teenager. Kavanaugh denied the allegations.

Gorsuch had so much to do when he was confirmed in 2017 he skipped his first private conference with his new colleagues so he could focus on the seven cases the court would hear the following week. Gorsuch took the bench for the first time a week after being sworn in.

In 2006, Justice Samuel Alito attended the State of the Union address only hours after being confirmed.

Jackson might have less need for downtime than some previous new justices since she already lives in the Washington area, said Barbara Perry, a presidential and Supreme Court scholar at the University of Virginia’s Miller Center.

Even so, the coming months will give her time to “get her sea legs” and “figure out her chambers and just get the folkways of the court down,” Perry said.

Some experts say Jackson’s hurry-up-and-wait timeline may become the new normal, particularly during election years when presidents want to get their nominees confirmed while their party controls the Senate -- and when retiring justices want to ensure their successors can be seated.

“I would imagine that will actually see more of these situations for justices who say that they’re going to retire,” Levy said. “That is, they want to finish out a term but want to provide ample time for someone to be named and then go through the confirmation process.”