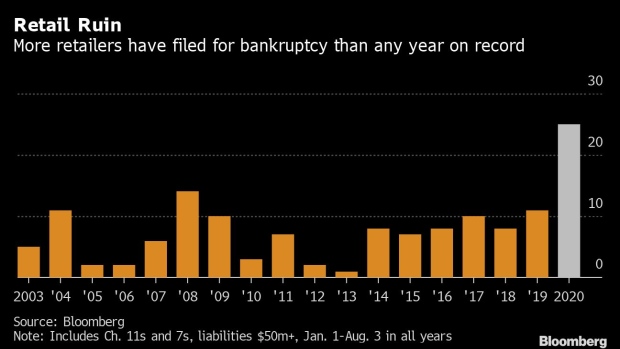 (Bloomberg) -- As bricks-and-mortar retailers face their biggest crisis yet, with a record number collapsing into bankruptcy even before the Covid-19 pandemic, one man is embracing them with both arms.

Starting with $250 million a decade ago, Salter manages a portfolio with revenue estimated at almost $15 billion ahead of the pandemic. Over the years, the focus has expanded from managing brands to buying up retail chains. His backers, Blackstone Group Inc. and General Atlantic LLC alongside Leonard Green & Partners LP, recently put an additional $600 million into the business and Salter now says he generally won’t look at deals under $1 billion.

But even at that size, there are a lot of them.

The latest acquisition spree has placed Authentic Brands at the center of the meltdown that’s wracked American retail. And with coronavirus ravaging an already-ailing sector, Salter shows no signs of slowing down.

“We feel that bricks and mortar is far better for us from a long-term standpoint,” Salter said in a telephone interview on Thursday. “If we have a store base in the U.S., it helps us build out the brand for multiple categories and more stores globally, plus having a store base also fuels your e-commerce strategy.”

The man who once declined to run retailers has acquired or explored deals for some of the best-known American merchants, including J.C. Penney Co. which is still up for grabs in bankruptcy court.

The expansion into traditional retail is part of a strategy to compile a portfolio of brands that appeals to shoppers of every income level and predilection. E-commerce, at 25% of sales and growing, is a big piece, too.

Early seeds of his more recent moves can be traced to his previous life as head of Hilco Consumer Capital LLC where he picked up some of the pieces of the last downturn -– the Great Recession -- teaming up with Gordon Brothers Group LLC to buy the brands for household names Linens ‘n’ Things Inc. and Polaroid.

There, they built on a more traditional licensing and digital model. But in 2016, mall owners got into the mix. Salter teamed with Simon Property Group Inc. and the precursor to Brookfield Property Partners LP to buy the beat-up teen fashion retailer Aeropostale out of bankruptcy – the same platform the three used for Forever 21 earlier this year. For Brooks Brothers, New York City-based Authentic has teamed with Simon Properties.

Such moves promise more control amid a wave of mall-based retailer bankruptcies, but the landlords were cautious.

The success of Aeropostale made them more amenable to looking at other troubled names, especially as more physical stores closed. Simon Property Chief Executive Officer David Simon told investors on a call a year ago that his company was open to investing in more retailers -- as the bankruptcy of a major tenant, Forever 21, loomed.

“If you don’t change that with what’s going on in the world, you get left behind, and David Simon has been a good leader in changing the model,” Salter said.

Banding with his companies’ landlords has clear benefits for Authentic. “Bringing in a mall operator as a partner is a pretty smart move for them because it helps them manage a key part of the risk associated with those acquisitions,” including rents, said Greg Portell, lead partner in consulting firm A.T. Kearney Inc.’s global consumer practice. “And by creating this portfolio effect, they’re able to manage that risk better than either a brand owner or a single retailer would be able to.”

Salter expects Authentic’s revenue to rise by 50% to about $15 billion this year, pro-forma for the pending addition of Brooks Brothers, but not taking into account the impact of Covid-19. Not that Authentic hasn’t felt some pain -- Salter said the company had to make significant furloughs. It didn’t take money from the Paycheck Protection Program.

Portell said Authentic’s expansion from brands to physical retail makes sense, notwithstanding a shift to more online shopping. “Owning brands that can’t reach consumers isn’t very helpful,” he said. “At some point, those wholesale channels get bottled up. What having storefronts does for Authentic Brands is give them an access point to consumers.” For the malls, Authentic can help with e-commerce, he said.

Salter’s vision for the 200-year-old Brooks Brothers has elements of his previous playbooks, like potential brand collaborations.

“We’re going to be very careful obviously with Brooks Brothers,” he said. “But there will be multiple collaborations. We’re going to focus on the sportswear area in a major way. Say we want to build an outerwear program that you and I are going to wear on the weekends -- maybe that’s a collaboration with Spyder.”

Salter said he’s been building brands his whole adult life, starting out at Wayler windsurfers and then Kemper and Ride snowboards. His four adult sons have followed him into the business and all work at Authentic, including his son, Corey, who serves as chief operating officer.

Salter also exudes optimism, Woodhouse said of his fellow Canadian. “I am a glass half-full guy -- he’s the glass full.”