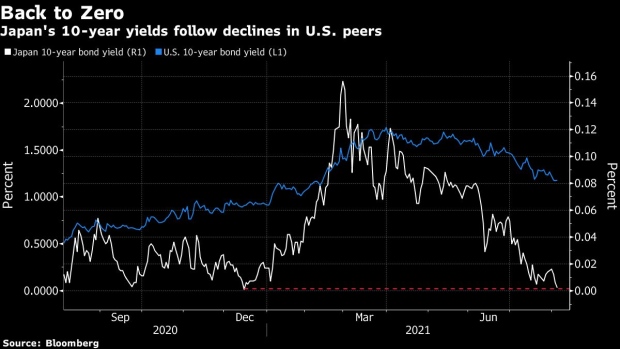 (Bloomberg) -- Japan’s 10-year bond yields fell to zero for the first time since December, tracking the recent slide in their U.S. peers.

The yield was 1.5 basis points lower on Wednesday, extending declines from as high as 0.175% in February. The latest move comes as a catch-up after Tuesday’s trading session saw no trades in 10-year benchmark bonds for the first time since June 1, a possible sign that the Bank of Japan’s yield-curve control continues to strangle market activity

Japan’s bonds have moved in tandem with U.S. Treasuries as yields have fallen, fueled by expectations the Federal Reserve will keep policy accommodative despite a recent increase in inflation. The Bank of Japan’s bond-purchase operations on Wednesday drew fewer offers to sell bonds in the one- to five-year tenors than its previous operation on July 21, indicating investors were reluctant to offload their holdings.

“The results of the BOJ’s bond-purchase operation have helped push the 10-year yield to zero,” said Keisuke Tsuruta, a strategist at Mitsubishi UFJ Morgan Stanley Securities Co. in Tokyo. The operation results confirm there is strong demand for bonds among investors, he said.