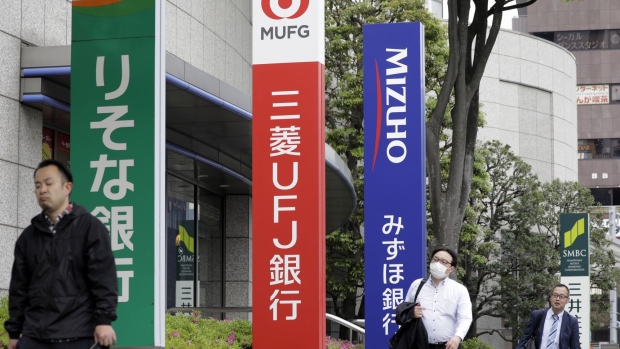 Pedestrians walk past signage for Resona Bank Ltd., from left, MUFG Bank Ltd., Mizuho Bank Ltd. and Sumitomo Mitsui Banking Corp. in Tokyo, Japan, on Friday, May 10, 2019. Japan's mega banks will announce their year-end earnings figures on on May 15. , Bloomberg

(Bloomberg) -- Japan’s biggest banks said they will jointly build a cheaper money transfer network catering mainly to small transactions among individuals, a move that may spur the nation’s drive toward going cashless.

The move follows government pressure for banks to reduce fees for sending money electronically, which have been seen as an obstacle to the adoption of cashless payments in the country.

Currently, banks use a payment network called the Zengin System, which will continue to handle large transactions like those between businesses. It handles about 6.5 million transactions worth 12 trillion yen ($113 billion) daily.

The two main lending units of Resona Holdings Inc. are also involved. In a joint briefing, the lenders said they want to launch the network as soon as possible but the exact timing hasn’t been decided.

Instead of building a system from scratch, the banks are likely to use the existing infrastructure for debit card payments, which will save costs. Debits have never become a major payment in Japan.

Other banks including regional lenders will join the system later. Eventually, non-banks such as financial technology companies will be invited as well, they said.