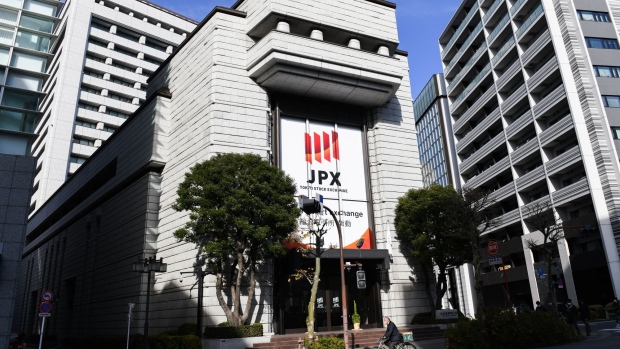 A cyclist travels past the Tokyo Stock Exchange (TSE), operated by Japan Exchange Group Inc. (JPX), in Tokyo, Japan, on Monday, Jan. 4, 2021. Asian stocks climbed to a new record, as technology shares remained strong in the first session of 2021. , Bloomberg

(Bloomberg) -- Osaka Exchange Inc. President Hiromi Yamaji will take the top post at the Tokyo Stock Exchange, filling the gap left by the former head who resigned after the equity market had its worst-ever outage in October.

Yamaji, 65, who started his banking career at Nomura Securities Co. in 1977, will take on the role from April 1, according to the Tokyo bourse’s operator Japan Exchange Group Inc. Yamaji joined Japan Exchange in 2013 as a company director and president of the Osaka Exchange.

Yamaji “has plenty of experience from his time running the Osaka Exchange,” Japan Exchange President Akira Kiyota said at a press conference in Tokyo on Monday. “With his experience, we hope to push forward with the market structure and Topix reform, as well as system outage prevention.”

The change in leadership at TSE comes as the exchange attempts to restore investor confidence following the Oct. 1 outage that prompted regulators to issue a business improvement order to Japan Exchange Group. Yamaji will also be tasked with helping oversee the exchange’s once-in-a-generation shakeup in little over a year -- an overhaul that will cut market segments, apply new listing criteria and turn five divisions into three.

Kiyota has been serving as the interim head of the Tokyo exchange since Koichiro Miyahara resigned in November following the outage.

Related story: How One Piece of Hardware Took Down a $6 Trillion Stock Market