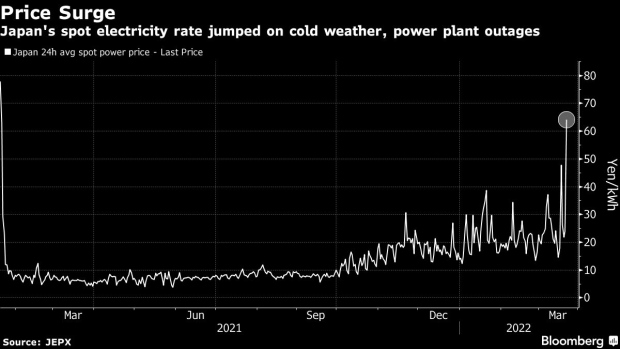 The country issued its first-ever power supply alert for the Tokyo area for Tuesday, Japan’s trade ministry said Monday evening. Tokyo Electric Power Co. expects reserves to fall to as low as 0% on Tuesday, according to a forecast at 11:50 p.m. local time on Monday. The expectation of a prolonged drop below 1% could trigger rolling blackouts, but Kyodo News reports that Tokyo Electric hasn’t prepared for that possibility.

Tokyo could receive additional power via sharing from other regional utilities to tackle Tuesday’s tight supply and prevent blackouts, the Ministry of Economy, Trade and Industry said in a statement. Tokyo Electric urged customers to conserve electricity this week.

Colder-than-normal temperatures are forecast for Japan on Tuesday, according to data compiled by Bloomberg. Cloudy weather is also expected across most of the country, which will curb output from solar power facilities.

The average price for next-day delivery power jumped to 64.06 yen (54 cents) per kilowatt hour on Monday, the highest since January 2021, according to data compiled by the Japan Electric Power Exchange. Japan’s average intraday power prices between 7:30 a.m. and 11 p.m. for Tuesday delivery hit 80 yen, the de-facto limit set by the government last year.

About 3.3 gigawatts of power capacity is still halted due to the impact from last week’s quake, putting pressure on the already tight supply, METI said on Monday. More than 6 gigawatts were offline last week immediately after the quake.