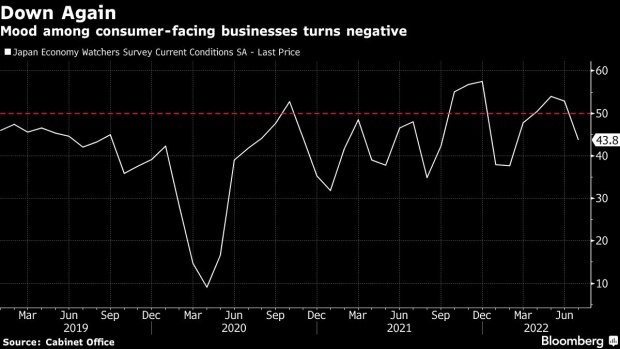 (Bloomberg) -- The mood among Japanese merchants fell sharply in July as the number of coronavirus infections resurged and inflation weighed on consumers.

A gauge of sentiment among store managers, taxi drivers and others who deal directly with Japanese consumers slid 9.1 points to 43.8 last month, the Cabinet Office’s Economy Watchers survey showed Monday. That was the largest decline since January, when Japan went through its initial omicron wave of the virus. A below-50 reading indicates pessimists outnumber optimists. Analysts had forecast 51.5. A measure of merchants’ outlook also worsened, declining 4.8 points to 42.8.

The drop in sentiment shows the vulnerability of an economic recovery that depends on consumer spending. A further worsening of the situation may prompt Prime Minister Fumio Kishida to consider coming up with additional support measures sooner rather than later. A report on Aug. 15 is expected to show a modest rebound in the three months through June following a contraction in the previous period.

Daily virus cases have surged to new records in the world’s third largest economy, topping 200,000 in late July. That hasn’t led the government to reinstate business restrictions, but high-frequency data suggest consumer mobility is falling. The rising cost of living is also hitting households while wage gains continue to trail inflation. Merchants cited the impact of infection cases and inflation as a reason behind their more dour mood in the report.

Separately, research firm Teikoku Databank Ltd. reported on Monday that the number of bankruptcies related to inflation climbed to a record 31 in July. This year, 116 businesses went down with higher fuel costs hitting transportation companies and the rising prices of materials weighing on construction firms.

There’s a risk that yet more inflation-related bankruptcies could follow, particularly among smaller businesses that are struggling to pass on costs, the report added. The number of firms going under due to rising prices could already hit an annual record this month, Teikoku Databank said.