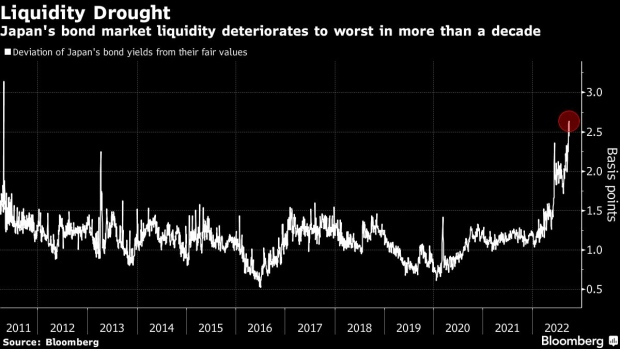 (Bloomberg) -- Japan’s bond market liquidity deteriorated to levels not seen in over a decade on growing fears that overseas rate hikes would lead to a global economic downturn.

A Bloomberg gauge measuring the deviation of Japanese government bond yields from model-estimated values soared this week to its highest level since April 2011, suggesting few investors were willing to bet that market dislocations will eventually be normalized.

Liquidity stress has emerged in JGBs and other bond markets this month as investors dumped everything from stocks and debt to commodities to seek refuge in cash. Japan’s situation has been aggravated by the central bank’s bond purchases, which have weakened the linkage between futures and debt.

“My sense is that the market is as dysfunctional as it was back in June,” said Jun Ishii, a senior bond strategist at Mitsubishi UFJ Morgan Stanley Securities Co. in Tokyo. “The most troublesome is a drop in the effectiveness of futures as a hedging tool, and it’s hurting the market.”

The difference between cash bonds and futures is now close to its widest in three months. In June, the Bank of Japan’s buying of cheapest-to-deliver securities sparked a blowout in arbitrage trades involving bonds and futures, leading to a surge in the so-called basis.

While the BOJ’s cap on yields and negative rate policy are helping to ease selling pressures on debt due in 10 years or less, longer-tenor bonds are exposed to overseas selloffs.

BOJ Governor Haruhiko Kuroda said last week that rising volatility in futures and super-long tenors has been contributing to a deterioration in market functioning.

“The BOJ will probably have to take some action to maintain yield curve control if volatility increases further,” Chotaro Morita, chief rates strategist at SMBC Nikko Securities Inc., said in a research note on Thursday. “That will be an increase in purchases of super-long tenors.”