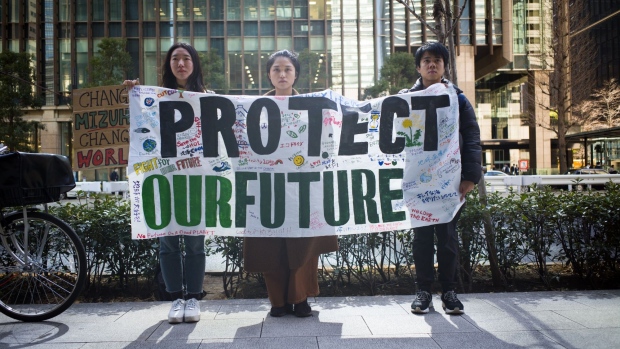 (Bloomberg) -- Japan’s most powerful government ministry doesn’t have one of the world’s biggest problems on its radar screen, according to a former top official at the ministry.

“Climate change is a problem that will change the economic system itself,” said Rintaro Tamaki, a former top bureaucrat at Japan’s finance ministry, which is in charge of the country’s budget and its tax rules. “But no one at the Finance Ministry is really paying attention to it.”

That will have to change if Prime Minister Yoshihide Suga’s ambitious goals for making the country carbon-neutral by mid-century have any chance of succeeding. Environmentalists have criticized Japan for its low use of renewable energy, along with its financing and building of coal power plants at home and abroad.

In an interview this week, Tamaki said his old ministry, where he worked from 1976 to 2011, should raise Japan’s already-high gasoline tax and hike tariffs on imported fossil fuels. The country should also make climate-related disclosures mandatory for its public companies, he says, so that they have more of an incentive to clean up.

Last week, finance ministers from the Group of Seven rich nations, including Japan’s, issued a statement committing to “the significant structural change needed to meet our net zero commitments and environment objectives.”

It’s a message Japan’s own finance ministry should take seriously back at home, Tamaki says.

He says climate change resembles debt -- another problem that Japan’s government struggles with -- because future generations will be the ones dealing with the consequences of both.

“If you keep on increasing your debt for thirty years, what happens is the older generations end up getting away with it,” Tamaki said. “The same thing applies to climate change. What I want to say is: Isn’t Japan depriving future generations of their freedom by not tackling these two things now?”