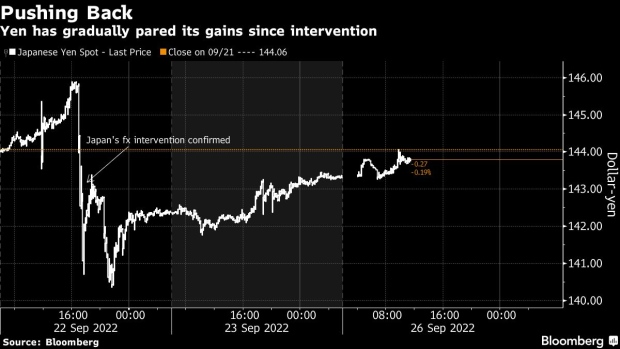 Shunichi Suzuki, a member of the Liberal Democratic Party (LDP) and the House of Representatives, speaks during a news conference at the party's headquarters in Tokyo, Japan, on Tuesday, Sept. 1, 2020. Japan’s ruling LDP adopted a structure for a vote to replace outgoing Prime Minister Shinzo Abe that could help the premier’s right-hand man, Yoshihide Suga, take over. , Bloomberg

“The intervention was conducted by the finance minister’s decision as a necessary means to deal with excessive moves and I think it was appropriate,” Kuroda said in his first public remarks since surprise actions were taken Thursday to prop up the yen. “The intervention and monetary easing are complementary.”

Kuroda told reporters that intervention is aimed at countering rapid, one-sided slides in the yen, and doesn’t contradict the BOJ’s easing efforts, which need to stay in place to support the economy.

Kuroda’s comments in the afternoon had limited immediate impact on the yen. The currency traded around 144 against the dollar in the evening in Tokyo, still stronger than the level it was before last week’s intervention.

Earlier in the day, finance chief Suzuki said the government remains ready to act against speculative moves in the foreign exchange market.

“We’re strongly concerned about speculative moves, and there’s no change in our stance that we’ll respond as needed,” Suzuki said in a press conference. “We’ll continue to monitor markets with urgency, and a deep sense of concern.”

The finance minister also added the government and the BOJ share a common sense of understanding, trying to show a united front.

Read more: Japan Intervenes to Support Yen for the First Time Since 1998

“Governor Kuroda has commented on the recent rapid weakening of the yen, showing strong concerns,” said Suzuki. “We have shared understanding over this, and will continue to cooperate in responding to this issue.”

Following Suzuki’s remarks earlier in the day Kuroda repeated his views about the yen’s rapid, one-sided slide, saying it’s harmful for the economy. At the same time he stressed the need for ongoing monetary easing because he sees the current cost-push inflation as unsustainable, and expects price growth to drop below the BOJ’s 2% target next year.

He also said letting the 10-year government bond yields go above its current range set by the BOJ can reduce the effectiveness of monetary easing.

“Japan’s first intervention to support the yen since 1998 is likely to stop the currency’s slide -- but only temporarily. The finance ministry appeared to have entered the market without coordinated buying from other nations, meaning the impact will be limited. The MOF cannot sustainably move the market on its own.”

Japan intervened to prop up the yen for the first time since 1998 on Thursday. The move came after the yen fell past the key psychological level of 145 against the greenback, after Kuroda showed determination to stick with ultra-low rates for even longer than previously expected.

Still, Kuroda appeared to walk back some of his comments on Thursday that suggested he expected the current low-rate guidance to last for two to three years in principle.

“The forward guidance is linked to the pandemic,” said Kuroda, whose term ends in April. “And when we say for ‘some time’ in reference to the guidance, it doesn’t necessarily mean it will last a long time, say for two to three years.”

Even so, Kuroda said he expects monetary stimulus to continue for years to come, indicating the wide policy gap with global peers will continue to help keep the yen weak.

While Prime Minister Fumio Kishida denounced speculative, excessive moves in support of the intervention, earlier in the month he said Japan should take advantage of the yen’s weakness to bring back manufacturing bases to Japan and boost inbound tourism.

The US Treasury stopped short of explicitly endorsing Japan’s action to intervene in the foreign-exchange market Thursday, while saying it understood the move. The lack of US participation in the yen-buying operation is likely to diminish the effectiveness of the move.

The finance ministry is set to report the details of its monthly currency intervention results on Friday.

“Kuroda has to support the intervention to show they are on the same page with the government,” said Shuji Tonouchi, senior economist at Mitsubishi UFJ Morgan Stanley. “But Japan will continue to be in a tough spot as pressures on the yen will persist as the BOJ easing continues.”