The Japanese government will end a state of emergency for Tokyo, Osaka and other areas on June 20 as planned, about a month before the country is due to host the Summer Olympics.

Prime Minister Yoshihide Suga said Thursday that Japan would act quickly to tackle any new infection surges as the country prepares for the July 23 start of the games. Apart from Tokyo and Osaka, Suga said the emergency will end the same day for seven other regions. The government will retain focused restrictions on seven regions including the capital through July 11, he said. 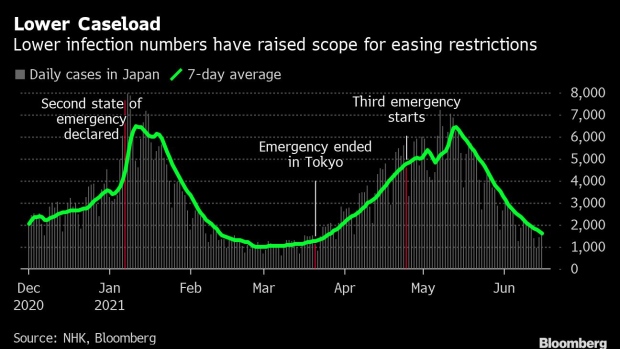 “What we need to be vigilant about above all is not to allow a major rebound,” Suga said at a news conference. He added the number of cases had stopped falling in some areas and said he was concerned about a growing number of infections related to virus variants.

The Olympics, delayed by a year due to the coronavirus, appear to be on track, even though surveys show large numbers of the Japanese public want to call off or delay the global sports spectacle out of fears it could become a superspreader event.

But the states of emergency have taken their toll and hurt consumption. Economists expect a rebound in the current quarter to be modest at best. The measures currently in place cover about 50 per cent of the output of the world’s third-largest economy.

Olympic organizers are set to make a decision later this month on whether to allow spectators. The government is backing a 10,000-person limit on public events, which could be applied to the Olympics, and Suga has said he would like to see fans in the stands for the games.

Olympic spectator limits will be based on the event rules, Suga said, adding he wanted the games to be a moment when the world will see it’s working together to overcome the pandemic.

Virus management is crucial for Suga, who faces a party leadership election in September and must hold a general election by the end of October. While none of the opposition parties has enough backing to topple his ruling Liberal Democratic Party, any major stumbles with public health related to the Olympics could prompt the LDP to replace Suga as premier.

The latest state of emergency for Tokyo started in late April and was the third for the capital during the pandemic. Infection numbers have fallen in Tokyo from 1,027 on April 29 to a seven-day average of 386 new cases daily as of Thursday.

But cases have ticked up slightly in Tokyo for the past two days compared with a week earlier. A disease modeling report presented to government officials this month indicated the number of people ill with COVID-19 could increase in the coming weeks, peaking when the Olympics are under way.

Japan’s vaccination rollout, which has accelerated in recent weeks, still ranks among the slowest for a developed country. While Suga said the vaccination of elderly people will be complete by the end of July, most of the population won’t be fully inoculated before the Olympics opening ceremony.

Vaccinations of those aged under 65 began in earnest Thursday at mass centers in Tokyo and Osaka. The sites, where military personnel have been administering Moderna Inc. vaccines to the elderly, have seen empty slots for inoculations in recent weeks.

But according to the Defense Ministry, all remaining slots at the Tokyo center through the end of the month were fully booked as of Thursday afternoon -- less than two days after the website was opened to that age group.

With large companies poised to start vaccinating their employees regardless of age next week, vaccine minister Taro Kono has said the government target of one million doses per day should be met by the end of the month.

Under the current emergency, bars and restaurants are banned from serving alcohol, and must close by 8 p.m., and individuals are urged to avoid unnecessary travel.

Economy Minister Yasutoshi Nishimura said earlier that under the focused measures, eateries would be allowed to serve alcohol until 7 p.m. if certain conditions are met, although local governments may impose their own restrictions.