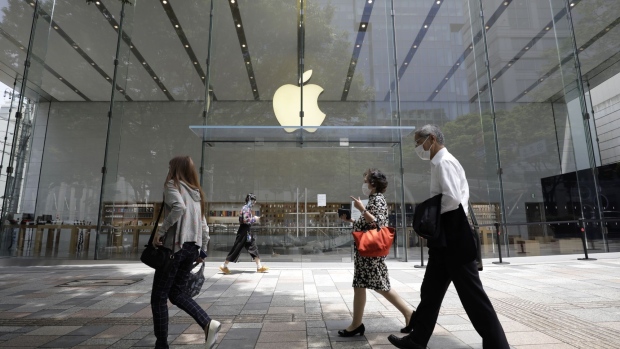 Pedestrians wearing protective masks walk past an Apple Inc. store in the Omotesando district of Tokyo, Japan, on Wednesday, June 3, 2020. Shuttered after the coronavirus outbreak forced a series of restrictive measures across the country, Apple reopens its flagship stores in Japan on Wednesday, bringing its physical retail network back online in one of its biggest markets. Photographer: Kiyoshi Ota/Bloomberg , Bloomberg

(Bloomberg) -- The Japanese government will start investigating how Apple Inc. and Alphabet Inc.’s Google deal with Japanese smartphone makers, which could lead to tightening antitrust regulations, the Nikkei newspaper reported Sunday, without saying where it got the information.

A government panel, which consists of officials, bureaucrats and external experts, will kick off the discussion this month as Apple’s iOS and Google’s Android software stands at more than 90% of the Japanese smartphone market, the paper said. The probe will include input from executives from domestic smartphone handset makers as well as manufacturers of smart speakers and personal computers.

The panel will evaluate business dealings in Japan and whether they are conducted in a fair manner compared with cases overseas. The government may step up antitrust regulations if the panel finds any issues from the probe, the paper said.