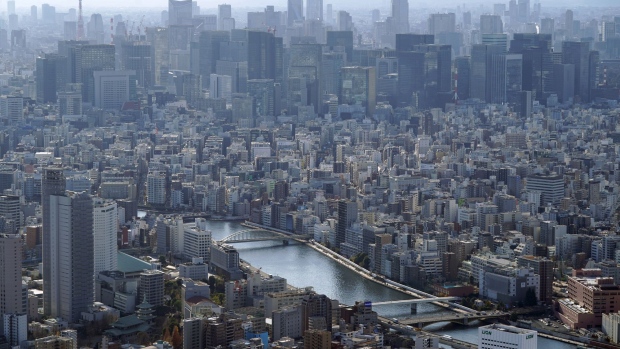 The Sumida River flows through Tokyo, Japan, on Friday, Dec. 25, 2020. Japan's infrastructure is already one of the world’s safest and investment in mitigating natural disasters is ramping up. Photographer: Toru Hanai/Bloomberg , Bloomberg

(Bloomberg) -- Investments in Japanese real estate investment trusts are now more attractive than traditional financial assets such as domestic stocks and bonds thanks to the Bank of Japan’s unprecedented monetary easing, according to a report by staff of the world’s largest pension fund.

Japan’s Government Pension Investment Fund employees concluded in the report released Sept. 10 that portfolio performance could be enhanced by managing J-REITs as a separate asset class. The GPIF, which has 192 trillion yen ($1.7 trillion) of assets under management, said the report is independent of its official position.

Between 2003 and 2015, J-REITs were a “high-risk, high-return” investment, but since the expansion of BOJ’s stimulus in 2016, when negative interest rates were introduced, they became a “low risk, high return” investment that is “extremely attractive,” the report said.

The GPIF had 0.7% of its total portfolio in alternative investments such as real estate, infrastructure, and private equity as of March 31.

Historical data showed that a portfolio including J-REITs had a higher return for the same amount of risk, compared to a portfolio that only included so-called traditional assets such as stocks and bonds. The GPIF said the paper is the result of research by its staff, and does not represent its official position.