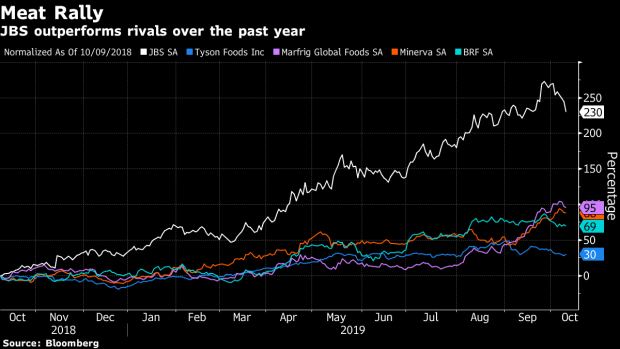 (Bloomberg) -- A request by two U.S. senators for a review of deals by JBS SA may be a drag on the Brazilian meat giant’s plans in a nation that accounts for most of its sales.

JBS shares fell as much as 5% on Wednesday after Republican Marco Rubio of Florida and New Jersey Democrat Bob Menendez asked the Committee on Foreign Investment in the U.S. to probe transactions made by the firm. The committee, known as Cfius, is a body led by the Treasury Department that reviews foreign acquisitions of American businesses for national security risks. It can impose conditions on deals or recommend that a transaction be blocked.

While analysts and investors see as low the possibility of JBS being forced to undo past U.S. deals, the episode brings the meat giant back to issues related to past wrongdoings from the brothers who control the company.

A possible Cfius investigation raises corporate governance questions and could lead to delays in JBS’s planned listing of shares in the U.S., according to Ricardo Alves, an analyst at Morgan Stanley.

“Could today’s developments become a legal impediment in any way? We don’t know the answer to that question yet, but we cannot ignore the possibility,” Alves wrote Wednesday in a note to clients.

JBS has been one of the biggest beneficiaries of a protein gap being created by African swine fever in China, with the company’s shares surging 153% this year versus the Brazilian benchmark’s 15% advance.

A U.S. initial public offering as soon as next year was touted as a way to unlock more value for JBS shares, which still trade at a discount to some peers on an estimated earnings basis even after the recent outperformance.

With the spotlights on its U.S. operations, JBS may also review its strategy for growth in the nation and reconsider an eventual big acquisition in that market, according to Soummo Mukherjee, an analyst at Lucror Analytics in New York.

After recovering from a corruption scandal in Brazil and slashing debt, the company is focused on mergers and acquisitions again, notably in the branded and processed-food business, Chief Executive Officer Gilberto Tomazoni said in mid-August. Later that month, JBS bought a U.K. pork company.

“The possible investigation adds uncertainties and may change JBS’ ambitions for a new big deal in the U.S.,” Mukherjee said by telephone.

Still, the news isn’t seen as negative for JBS bonds as investors have already been demanding a premium to hold the notes compared with U.S. rivals Tyson Foods Inc. and Smithfield Foods Inc., which present similar metrics.

The Sao Paulo-based company has fully cooperated with all relevant authorities in a transparent manner regarding past events in Brazil and will continue to respond to any subsequent inquiries, it said late Tuesday in an emailed statement. The firm added it “plays a critical role in U.S. agricultural communities,” providing more than 60,000 jobs and partnering with around 11,000 farmers in the country.

--With assistance from Gerson Freitas Jr. and Julia Leite.

To contact the editors responsible for this story: James Attwood at jattwood3@bloomberg.net, Carlos Caminada