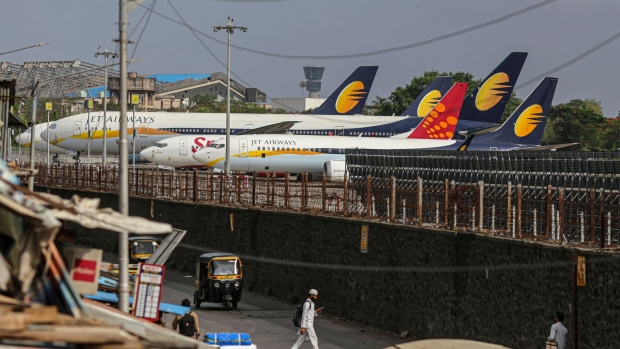 Jet Airways India Ltd. and a SpiceJet Ltd. aircraft at Chhatrapati Shivaji Maharaj International Airport in Mumbai, India, on Wednesday, May 26, 2021. India is preparing a stimulus package for sectors worst affected by a deadly coronavirus wave, aiming to support an economy struggling with a slew of localized lockdowns, people familiar with the matter said. The finance ministry is working on proposals to bolster the tourism, aviation and hospitality industries, along with small and medium-sized companies. Photographer: Dhiraj Singh/Bloomberg , Bloomberg

(Bloomberg) -- Jet Airways India Ltd., the carrier undergoing a court-monitored process to emerge from bankruptcy, won’t return to the skies this month as previously planned, according to people familiar with the matter.

The airline, once India’s top private carrier, can’t sell tickets in September because lenders are reluctant to allow it to take on any fresh liabilities such as an aircraft order, said the people, asking not to be identified discussing private negotiations. Jet is also still in talks with plane manufacturers and lessors to obtain contracts, one of the people said.

The airline is “very close” to finalizing its initial fleet plan and preparing to start sales and resume operations “in the coming weeks,” a representative for Jet’s new owners said in a statement. “There is no deadline; target dates are set by us alone, and we have always maintained that this is a marathon, not a sprint.”

There are no restrictions on Jet placing an aircraft order and it’s free to add new assets, according to the statement.

Bloomberg News reported in late August that Jet is in advanced talks to order about 50 Airbus SE A220 aircraft. The carrier is also in discussions with Boeing Co. and Airbus to potentially place a “sizable” order for the 737 Max or A320neo families of jets.

After collapsing in debt in 2019, Jet is being taken over by Dubai businessman Murari Lal Jalan and Florian Fritsch, chairman of London-based financial services firm Kalrock Capital Management Ltd. They vowed to get the carrier back in the air by March this year, but Jet hasn’t placed an order for any new aircraft after the majority of its old fleet was leased to other airlines. It has, however, started hiring staff and begun a social media campaign.

India’s bankruptcy court will hear on the progress of the new owners’ rescue plan for Jet on Oct. 11. The regulator will be informed as soon as Jet finalizes aircraft and engine deals, a representative for the Jalan-Kalrock consortium said.

“Starting or restarting an airline is a complex business, and we want to be sure we take the time to get the best possible terms and contracts for both aircraft and engines, including maintenance contracts, as well as to receive aircraft configured the way we want,” the statement from the new owners said. “If that takes a little more time to get right, that’s fine.”

Some Boeing Max jets originally earmarked for Chinese airlines are available amid uncertainty over the China’s Covid policies and travel curbs, while Airbus’s A320neos can be leased. Planemakers will likely demand a sound business plan and financial assurance from Jet before assigning it any aircraft.

Boeing didn’t immediately respond to a request for comment. A spokesperson for Airbus declined to comment on any discussions the company may or may not be having with customers.

Jet’s Chief Executive Officer Sanjiv Kapoor has hit back at naysayers, taking to Twitter to defend the carrier’s recovery. He recently tweeted that it takes time to get something as complicated as relaunching an airline right.

“You need a war chest to survive, especially the first two to three years,” he said. “Getting the business model right in the current hyper-competitive environment, along with adequate capitalization, are the two important pivots for Jet going forward.”

Any successful revival of Jet, which forced creditors to take a 95% haircut, would be the first for any airline under India’s bankruptcy laws and should bolster Prime Minister Narendra Modi’s image as a business-friendly leader.

Founded by ticketing agent-turned-entrepreneur Naresh Goyal after India ended a state monopoly on aviation in the early 1990s, Jet became popular among fliers as an attractive alternative to flag carrier Air India Ltd. It offered full-service flights to cities including London and Singapore before the arrival of several low-cost airlines ushered in cheap fares for no-frills services.

Citing people it didn’t identify, India’s Economic Times reported earlier this month that another reason for the delay is that Jet wants enginemakers Pratt & Whitney and CFM International to bear a large share of the cost when a plane’s turbine is replaced.

Jet’s shares have slumped around 30% from a May high. They were largely steady in trade Tuesday.

(Updates with shares in final paragraph.)