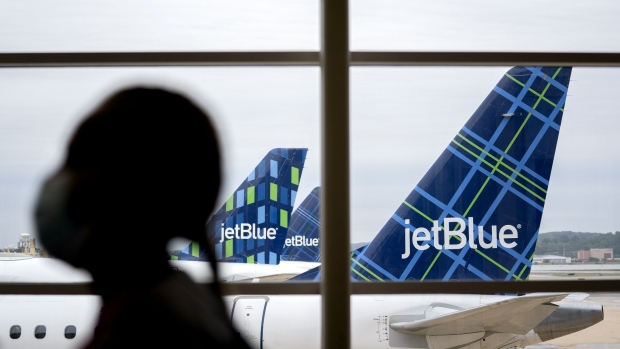 (Bloomberg) -- JetBlue Airways Corp. is working with consultants to set targets for a new round of cost cuts, even as it prepares to meet surging consumer demand for travel.

The airline expects to see “progressive improvement” in its cost performance throughout the rest of this year, following an operational meltdown in April that led to hundreds of flight cancellations and cost overruns, Chief Financial Officer Ursula Hurley said at a Bank of America conference Tuesday.

JetBlue, which is pursuing a $3.3 billion hostile takeover bid for Spirit Airlines Inc., previously had said it would detail its next round of “structural cost initiatives” at an investor day later this month. It’s ultimately targeting low single-digit growth in costs for each seat flown a mile in 2023, excluding fuel, Hurley said.

The Long Island City, New York-based carrier has said unit costs this quarter, excluding fuel, will be as much as 17% above 2019, in part due to its missteps this spring. The April operational problems, caused in part by staffing shortfalls, forced JetBlue to trim its summer schedule more than 10% and reduce growth plans for the full year.