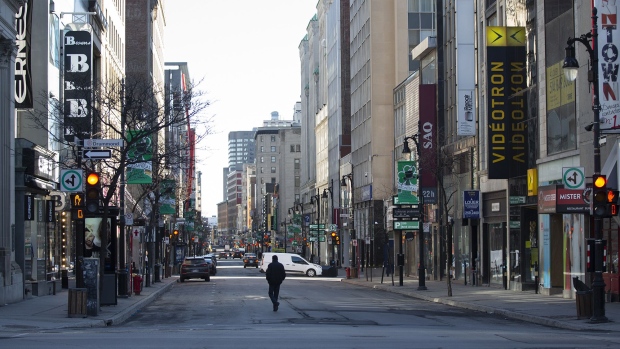 (Bloomberg) -- Policy makers will be paying close attention to Canada’s March jobs report for an early look at industries and workers who took the first blows from the pandemic-induced shutdown.

Statistics Canada will release employment data for March on Thursday. The figures will be based on a survey of households conducted from the 15th to 21st of that month, a period that coincided with the first strict social distancing measures enacted by federal and provincial governments to stem the spread of Covid-19.

While there’s little doubt the figures will be ugly -- the median forecast calls for a net loss of 500,000 jobs -- the report will provide more clarity as to which workers were hardest hit.

Unlike previous recessions, this downturn is decimating service-sector industries. That means females, immigrants and lower-wage workers will be disproportionately affected, according to Armine Yalnizyan, an economist in Ottawa.

“The service-sector industries are more female dominated than the goods-producing industries, they’re worse paid, they’re less likely to be unionized” said Yalnizyan, an Atkinson Fellow who does research on the changing nature of work. “A lot more of those jobs are precarious and multiple job holders, so people that are patching together work. Those are all the people that are going to get hit first.”

The airline and tourism industries were some of the first casualties of Covid-19 as governments began to close borders and advise against non-essential travel. Next came the closure of all non-essential businesses. That forced restaurants, movie theaters, gyms and any other entertainment venues to close.

Since March 15, more than 4 million Canadians have applied for the emergency income support program put in place by the government to help those who have lost work because of Covid-19. That equates to more than 20% of Canada’s workforce, meaning roughly one in five Canadians in the labor force have lost income.

Perhaps most at risk are women who’ are self-employed, temporary contract workers and young, Yalnizyan said.

“We’re hearing all sorts of reports of these people losing shifts, losing hours of work and they tend to skew toward women,” she said, citing the cleaning services and personal care sectors. “All those types of multiple-job holders skew toward women, so there’s a real gender story here and a real-lower waged and precarious workers.”

In a bid to keep workers on the payroll, the government introduced a program last month that will provide companies with a 75% wage subsidy. To what extent companies will be able to use this instead of laying off workers remains to be seen.

Many businesses already say it won’t help them. Workers who have lost income due to the pandemic-induced shutdown will be able to apply for an emergency benefit that provides C$2,000 ($1,423) for a four-week period up to 16 weeks. The cash has already started to hit bank accounts.

The March employment report will be the first of many to show the toll that COVID-19 is having on the economy. Earlier Wednesday, data on housing starts and building permits showed a deceleration in construction activity in March.