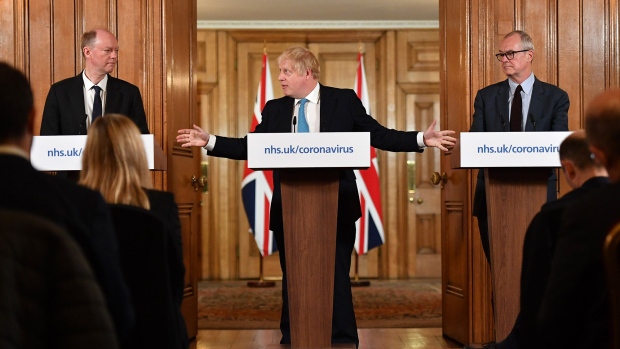 (Bloomberg) -- For Boris Johnson, as for others, it started with a cough and a fever.

The British prime minister did what he was told by the most senior medic in the land and took a test. Johnson was in his Downing Street apartment at midnight on Thursday when the result came through: he’d tested positive for coronavirus. It was the moment the pandemic literally hit home.

Johnson, 55, is the first world leader to reveal he has Covid-19. His illness graphically illustrates the indiscriminate nature of a disease that has now infected more than 600,000 people around the world and killed 28,000. But as Johnson isolates himself, picking up meals and official papers left outside his door, the infection raises more questions about his attitude to a crisis many medical experts felt he failed to take seriously for too long.

For one thing, Johnson is not the only member of the British government to be hit. Health Secretary Matt Hancock announced on Friday that he too had tested positive for the virus. Three hours later, Chief Medical Officer Chris Whitty revealed he was isolating with symptoms.

While all three insist they’re still working, one question now dominates the debate in the U.K.: if the officials leading the fight against the virus can’t even keep themselves safe, how can they protect the rest of the country and its beloved National Health Service?

In the U.K., 759 have lost their lives. The rate of infection is racing ahead, with the number of new cases doubling every few days. In Italy and Spain, the rapid spread has sent their death tolls way beyond China’s—the virus’s original epicenter—and overwhelmed hospitals.

Horton has been an outspoken critic of Johnson’s approach, warning for weeks that the government has been too slow to act.

There has been a litany of criticisms from many quarters, though, including among his fellow Conservatives: The government shouldn’t have all but stopped testing in the community or begin a misguided policy of seeking “herd immunity” rather than fighting the contagion. It also delayed the imposition of tough restrictions, and kept schools open.

While other countries were ordering curfews and deploying the military, Johnson instead sought to use behavioral psychologists in the government’s so-called “nudge unit” to persuade the public to do the right thing.

For Johnson, the gamble on a different approach was offset by the fact that his own advisers lent it their support. But the stakes now are high. “One of the functions of a prime minister is to take the blame,” his biographer Andrew Gimson said. “He will take the blame if it all goes wrong—he will have to go, actually.”

At key moments in the outbreak, Johnson has seemed in denial about the size of the threat—and to his critics, it showed. At the start of the month, the premier quipped that while everyone must wash their hands for the time it takes to sing “Happy Birthday,” that did not stop him shaking hands with people he meets.

“I can tell you I am shaking hands continuously,” Johnson told reporters in a clip that has since gone viral on Twitter. “I was at a hospital the other night where I think there were actually a few coronavirus patients and I shook hands with everybody.”

As the man who led his country out of the European Union, Johnson has often evoked his idea of British-ness, the unflappable belief that the country is different and all will be well. Indeed, it helped him to an emphatic election victory in December. But making light of a crisis has now landed Johnson in trouble.

On March 16, after weeks of downplaying the issue, he suddenly urged all U.K. citizens to stay at home and avoid unnecessary contact with other people. It would be the prelude to more action that would shut the nation down. Yet later that evening, Johnson made light of the situation on a call with the manufacturers he was trying to persuade to produce thousands of urgently needed ventilators for hospitals. He joked that their task should be code-named “Operation Last Gasp.”

Not everyone saw the funny side. “I was shocked,” said one witness, who asked to remain anonymous. “I don’t know how many people were on that call but some of the comments were not appropriate to the seriousness of the situation.”

As the crisis deepened in the days that followed, the government’s response accelerated further. The country’s finance chief, Chancellor of the Exchequer Rishi Sunak, unveiled a 350 billion-pound ($435 billion) “wartime” rescue package for businesses. The next day, Johnson finally agreed to close schools across the country.

Yet after three days of drama and amid growing alarm, an upbeat Johnson decided on March 19 it was time to rally his troops for the push toward victory. He bounded into the wood-paneled state dining room in No. 10 Downing Street, smiling and joking with reporters in front of him.

“I am absolutely confident that we can send coronavirus packing,” he defiantly declared. A new test could be a “game changer” in the fight against the disease, he said, adding that the U.K. could “turn the tide” of the outbreak in 12 weeks.

By March 23, Johnson was addressing the nation in their living rooms, telling them they would be locked down for an initial three weeks. The first week hadn’t even passed before the prime minister himself fell ill.

Throughout, the government has insisted all his decisions were taken on the basis of “the best” scientific evidence. The public would get bored of being told to limit their movements for too long, so timing the restrictions perfectly was vital, officials said. The only verdict that counts will come when the death toll is finally known.

But another explanation for Johnson’s approach may lie in his temperament. “He loves being the center of attention,” said Gimson.

Most of all, Johnson has defined himself as a liberal conservative. He has long railed against the “nanny state” for telling people how to live their lives. Explaining his own reluctance to order stricter measures, he said on March 18: “We live in a land of liberty.”

Even when he did try to stop people socializing in bars and restaurants, Johnson could not quite bring himself to treat the issue seriously. In his words, he was asking people to accept an almost impossible demand and give up the “inalienable right” of every “freeborn” Briton to go to the pub. It was a light-hearted message that threatened to undermine the gravity of his request.

On the Sunday before he ordered a full national lockdown, Johnson implored the public to value the freedoms they stood to lose. “Other countries have been forced to bring in restrictions on people’s movements, altogether,” he said. “I don’t want to do that. It’s so important that that pleasure and that ability is preserved—but it can only really be preserved if everybody acts responsibly.”

The tussle between freedom and responsibility may become the conflict that defines Johnson’s career. He rode to power on a campaign to release the U.K. from the EU’s legal shackles. His overriding promise was to “unleash” Britain’s potential.

Now Johnson, like thousands of his fellow citizens, is living in isolation in his apartment and dealing with the disease for the next week alone. The irony is that he has put the entire population—himself included—on the tightest leash of all.