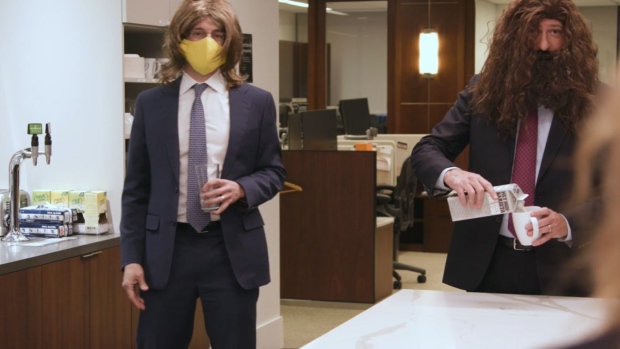 Blackstone Group Inc. has had a winning year -- raising US$63 billion, buying and selling in the life sciences field and seeing its stock hit an all-time high on Tuesday.

But things have been a little scary behind the scenes, according to an internal (and self-spoofing) video sent to employees Wednesday by the world’s largest alternative-asset manager, a copy of which was obtained by Bloomberg before it was posted online.

President Jon Gray uses a megaphone in the office to communicate with socially distanced colleagues. Chief Executive Officer Stephen Schwarzman puts a cardboard cutout of himself in front of his computer to attend Zoom meetings. And David Blitzer and Ken Caplan have grown their hair to their shoulders.

So much for sustaining corporate culture during a pandemic; at least they’re in suits, not sweatpants.

Blackstone’s holiday videos started three years ago, when Gray became president. Inspired by “The Office,” they have Gray searching for ways to make up for the cancellation of the holiday party -- a more fitting conceit than ever in 2020.

Some at Blackstone have thrived. Mr. Stone, the mascot introduced in last year’s video, has gone from dunking basketballs to vetting the firm’s investments (e.g. finding dates on Bumble and exploring his family tree on Ancestry.com).

Not every element is fictional: There really is a weekly photo contest. And to be sure, the pandemic has spurred not just satirical videos but also US$15 million in donations for COVID relief in New York, volunteering and a decent group lip-sync to “Walking on Sunshine” in honor of first responders, essential workers and teachers, which is the video’s feel-good finale.

But self-mocking humor has its place. Gray said in an interview he’d like the video to bring a smile after a tough year. He’s fine with employees and anyone else getting some laughs at his expense.

Cue the scenes where he’s a terrible Secret Santa, looks ridiculous in a Christmas sweater and leads meetings with no one bothering to tell him he’s on mute.

Gray said that while he has no doubt talked without unmuting, “The idea that no one has told me has not happened.”

Well, not that he knows of.