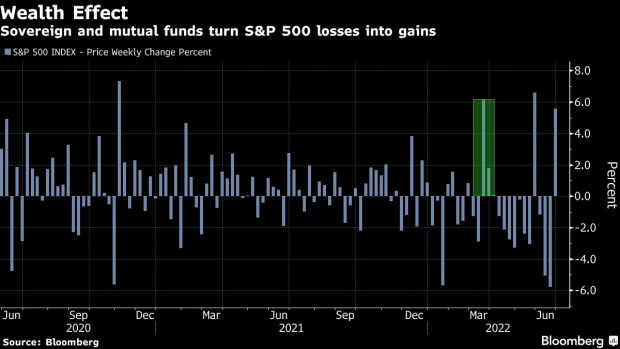 (Bloomberg) -- JPMorgan Chase & Co.’s Marko Kolanovic, a steadfast bull on US equities during this year’s selloff, is calling for stocks to rise 7% next week as pension and sovereign wealth funds rebalance their portfolios.

These money managers that form the backbone of the investing community typically rebalance their market exposures every quarter in order to obey strict allocation limits between stocks and bonds. Next week’s rebalancing, for the quarter and month end, could wield an outsize influence on stock prices in the current period of poor liquidity, which is now five times lower than the historical average, Kolanovic and colleague Bram Kaplan said a note on Friday.

On top of low liquidity, equities are down 21% for the year, 16% for the quarter and 9% for the month, the JPMorgan note said.

“Rebalances across all 3 lookback windows would reinforce and, based on historical regression, would imply a ~7% move up in equities next week,” the note said. “Of course, rebalances are not the only drivers and the estimated move is assuming ‘all else equal.’”

In May, the bank estimated that $250 billion of investments could be recovered in stocks from the sovereign wealth and pension funds by the end of June. Elevated cash allocations, high shorting activity as well as the market being in “oversold condition” could further support the upside in equities.

JPMorgan strategists have been beating the bullish drum for months, making them outliers as the S&P 500 plunged into a bear market.

The bank had a similar forecast at the end of the first quarter, saying the rebalancing would give a boost to global markets of as much as 10%. While that proved over-optimistic the MSCI World Index nevertheless clocked an advance of 2.5%, the only month of gains so far in 2022.

While JPMorgan sees increased probability of a recession, the bank doesn’t forecast it to be a base-case scenario over the next year.

“It is not that we think that the world and economies are in great shape, but just that an average investor expects an economic disaster and, if that does not materialize, risky asset classes could recover most of their losses from the first half,” they wrote.