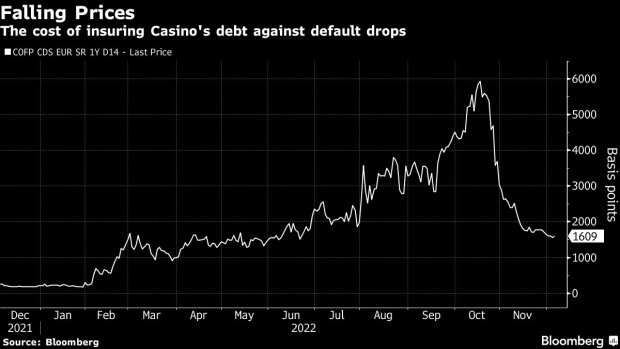 (Bloomberg) -- JPMorgan Chase & Co. suffered a $70 million loss from a few large bets on bonds and credit-default swaps put on by its European high-yield trading desk.

The majority of the losses are tied to trades overseen by Gianfranco Canepa, the bank’s former co-head of high-yield trading for EMEA, according to people with knowledge of the trades.

The positions swung from a gain, with losses accelerating quickly in the weeks around Canepa’s recent departure to take a role at credit hedge fund GoldenTree Asset Management, according to the people who asked not to be identified discussing confidential conversations.

Spokespeople at JPMorgan and Goldentree declined to comment. Canepa didn’t respond to multiple attempts to contact him.

The European high-yield credit market, where investors buy and sell billions of euros of risky corporate bonds and derivatives, has been roiled by volatile geopolitics this year ranging from the ongoing war in Ukraine to the UK’s economic meltdown, all against a backdrop of increasing interest rates. The cost to insure junk bonds against default soared in late September to the highest since the Covid pandemic before subsequently easing.

Canepa amassed a position of around €500 million ($526 million) on Casino Guichard-Perrachon SA, including buying credit default swaps insuring the underlying debt of the French grocer, some of the people said.

That position accounted for part of the losses. The price of Casino’s one-year swaps has fallen sharply since October, indicating a much lower probability of default.

Canepa had also made bets on commodities firm Metalcorp, a subsidiary of Monaco Resources Group SAM, that failed to repay €70 million of debt on time to investors in October. That position resulted in losses of around $20 million, some of the people said.

JPMorgan’s high-yield desk had offered above-market prices for Metalcorp bonds in October, people familiar have said. While it’s not uncommon for there to be differences in the prices of bids, the premium the bank offered on Metalcorp’s bonds compared to other firms was considered unusual by investors. In a note to clients late last year, the lender said it had a long position in those bonds.

--With assistance from Nishant Kumar.