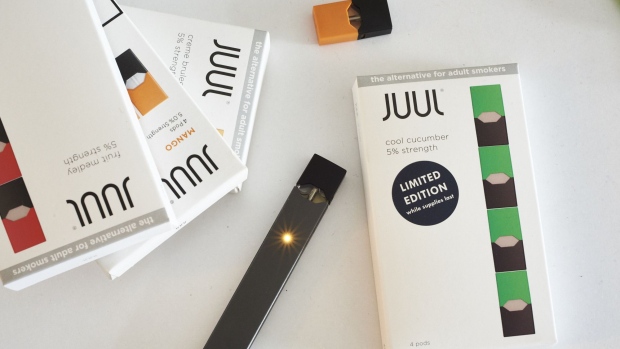 A Juul Labs Inc. e-cigarette and flavored pods are arranged for a photograph in the Brooklyn Borough of New York, U.S., on Sunday July 8, 2018. , Bloomberg

Juul Labs Inc.’s founders used a US$12.8 billion investment from Altria Group Inc. to enrich themselves, a minority shareholder in the e-cigarette maker claimed in a lawsuit.

The board broke laws that govern its obligations to shareholders, according to the lawsuit, which singles out the company’s co-founders, Adam Bowen and James Monsees. The suit, filed in California state court last week, says each sold US$500 million in stock after the Altria deal while denying similar opportunities to minority shareholders.

“Bowen and Monsees are using their control of the company to cause the board to rubber-stamp their self-dealing conduct,” according to the plaintiff, Daniel Grove. The suit seeks to block Juul’s board from approving further transactions involving its members and to make the company hold annual meetings. It also seeks to represent others as a class of plaintiffs.

Juul’s board should have used the Altria money to invest in the company’s controls to avoid a US$19 billion loss of value as Juul was beset by lawsuits and regulatory actions, Grove claims.

After negotiating the investment by Altria, which was made in December 2018, Juul’s directors paid themselves a special dividend and bonus, taking liquidity out of the company that could have been used for general corporate purposes, Grove says. The board also put restrictions on stock sales by minority shareholders that didn’t apply to its own members, he says.

Juul said in a statement that the suit is “without merit and filled with factual inaccuracies.”

“We remain focused on resetting the vapor category in the U.S. and earning the trust of society by working cooperatively with attorneys general, regulators, public health officials, and other stakeholders to combat underage use and convert adult smokers from combustible cigarettes,” it said.

The suit adds to a growing number of legal actions against Juul, of San Francisco. They include parents who say the company’s sleek devices addicted their teens and school districts that argue they’re bearing the financial burden of widespread addiction. Juul has already scaled back its business, pulling most of its flavored vaping products from the market and curbing much of its advertising and lobbying.

The complaint was reported last week by Law360.

In a suit of its own, filed against Grove just before his, Juul seeks to stop him from gaining access to its books and records, saying he signed a waiver of his rights to do so.

Grove’s lawyer, Francis Bottini, said his client is seeking information about payments to Juul board members related to the Altria deal and that under California law he didn’t sign away those rights. Bottini said Juul’s lawsuit against Grove is “without merit.”