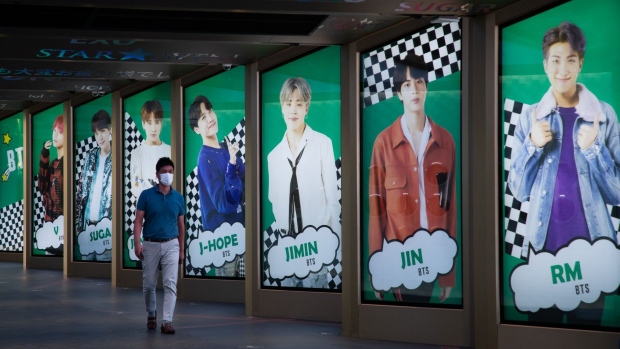 A pedestrian wearing a protective mask walks past an advertisement for K-pop boy band BTS displayed in Seoul, South Korea, on Friday, Sept. 18. 2020. Big Hit Entertainment Co., the manager of K-pop boy band BTS, is looking to raise as much as 962.6 billion won ($812 million) in a South Korean initial public offering that is set to be the country’s largest in three years. , Bloomberg

(Bloomberg) -- K-pop boy band BTS is ending its distribution deal with Sony Music’s Columbia Records and will instead partner with Universal Music Group, a person familiar with the situation said.

The move is a coup for Universal Music, which had been pursuing the tie-up for years. Universal Chief Executive Officer Lucian Grainge had been personally wooing Bang Si-hyuk, founder of BTS’s management company Hybe.

The deal includes Universal’s Ingrooves Music division handling distribution and Universal’s Geffen Records providing creative support and marketing, according to the person, who asked not to be named as the plans remain private. Universal’s Interscope has had a deal for three years with K-pop girl group Blackpink, which has made inroads with Western audiences and headlined the Coachella music festival in 2019.

Distribution deals for K-pop acts have been increasing in response to the growing global popularity of the genre. Universal and Hybe announced a new partnership on Thursday with YG Entertainment and Kiswe launching a new global live streaming platform. In February, Universal and Hybe announced an expanded strategic partnership that included a joint venture label with Geffen Records to debut a “global K-pop boy band.”

BTS was the top-selling recording act in the world last year, according to IFPI. Its videos combined for 10.6 billion U.S. on-demand streams, according to Billboard, which first reported the deal.