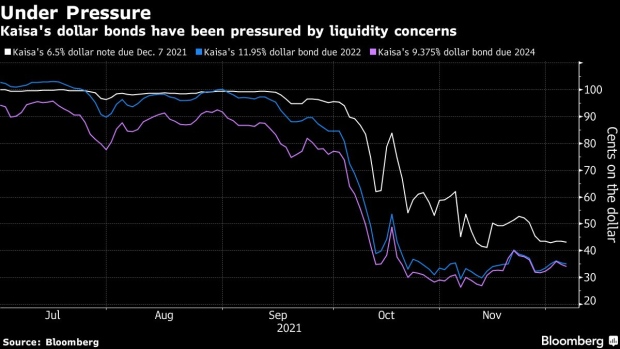 (Bloomberg) -- Kaisa Group Holdings Ltd. has suspended stock trading in Hong Kong amid growing concern over the Chinese developer’s ability to service its debts as distress in the nation’s property sector spreads.

The company faced repayment on a $400 million dollar bond that came due Tuesday after it failed last week to win approval for a debt swap that would have extended its repayment deadline. A group of Kaisa noteholders sent the company a formal forbearance proposal on Monday, people familiar with the matter said, but the outcome was uncertain. No reason was provided for the trading suspension, which is its second halt in just over a month.

Kaisa, which became first Chinese developer to default on dollar debt in 2015, now risks reneging on its debt obligations again. Its the nation’s third-largest issuer of dollar notes among property firms, and its stumble adds to contagion risk just as investors grapple with an escalating crisis at China Evergrande Group.

Like Evergrande, Kaisa has been a frequent borrower in the offshore market with some $11.6 billion of dollar notes outstanding, even as it ranks just 27th among China’s property developer by sales. It had attracted strong demand from global investors after it returned in 2016 following a hiatus amid its restructuring.