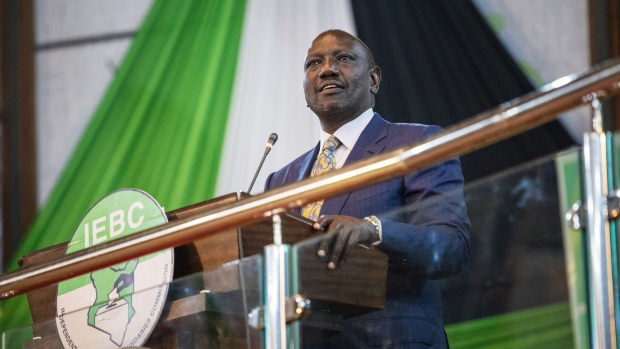 William Ruto, newly-elected president of Kenya, addresses the nation after the announcement of the election winner at the Independent Electoral and Boundaries Commission (IEBC) Center in Bomas in Nairobi, Kenya, on Monday, Aug. 15, 2022. Ruto, 55, garnered 50.5% or 7.1 million of the valid votes and his main rival Odinga 48.9%, the Independent Electoral & Boundaries Commission said. , Bloomberg

(Bloomberg) -- The successful completion of Kenya’s presidential election can accelerate the pace of merger and acquisition negotiations that had been put on ice and also unlock new deals.

Since being sworn in three weeks ago newly elected President William Ruto has announced steps including the removal of an expensive gasoline subsidy and the lifting of a ban on genetically modified organisms that will allow for imports of enhanced white corn. He also wants to slash about 300 billion shillings ($2.48 billion) from the budget to lower the need for taking on more debt.

Ruto took the reins in East Africa’s biggest economy after a peaceful election, in contrast to some vote cycles that have been marred by violence and protracted court challenges, causing investors to hold off making any decisions on spending until things settled.

“The new government is very keen to fix and strengthen our economy and it seems it is focused on enabling a great economic environment to attract local and foreign investment,” said Paras Shah, managing partner for Kenya at legal firm Bowmans. “At least in the first few weeks, we have seen some hard decisions being made and a lot of strong indications to reform the economy to attract investment.”

Financial technology will continue to take the bulk of investments, driven by mobile-money innovations and good returns, Shah said in an interview. Regulatory requirements for Kenyan insurers to improve solvency ratios will also result in consolidation-driven mergers and acquisitions.

Read: Funding for African Startups Doubles in First Half of 2022 (1)

“We see an overpopulation of insurance companies in Kenya coupled with strains on capital ratios for the smaller players,” Shah said. “This should be strong reason for consolidation and growth in the sector, perhaps by the larger players acquiring smaller players, or small players merging.”

Other sectors that will be of interest include agriculture, consumer products and industrials in efforts to ease the local effects from the global supply chain constraints.

Kenya offers decent returns compared to other African countries and a lot of private equity investments made in the past seven to 10 years are ripe for exit, he said.