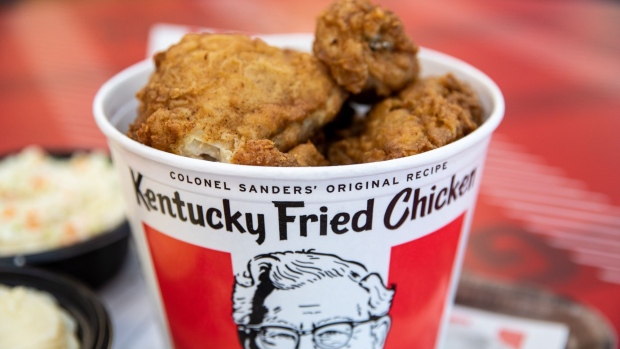 A bucket of fried chicken is arranged for a photograph at a Yum! Brands Inc. Kentucky Fried Chicken (KFC) restaurant in Norwell, Massachusetts, U.S., on Thursday, July 25, 2019. Yum! Brands is scheduled to release earnings figures on August 1. , Bloomberg

Restaurants Development Co. is exploring the sale of its KFC franchise business in Thailand for about $200 million, according to people with knowledge of the matter.

The Bangkok-based company is working with at least one adviser on the potential sale, the people said, asking not to be named as the discussions are private. Restaurants Development operates about 200 KFC outlets that employ about 4,000 staff throughout the country, according to its official website.

The talks are still at an early stage and there is no guarantee they will result in a transaction, the people said.

Representatives for Restaurants Development didn’t immediately respond to requests for comment. The company is backed by a consortium of Thai and Asian investors, according to its website.