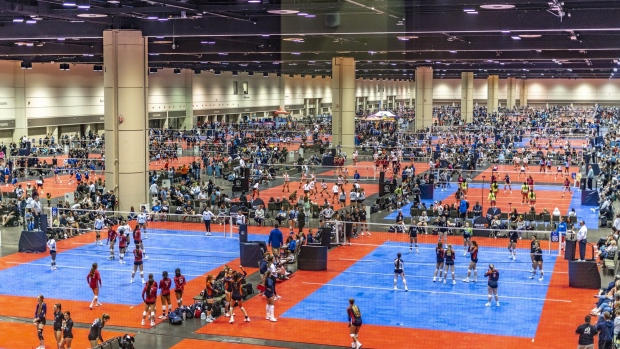 The ASICS Florida Volleyball Challenge hosted by the Florida Region of USA Volleyball at Orlando's Orange County Convention Center in April 2022. , via Bloomberg

(Bloomberg) -- The convention center industry is recovering from the pandemic steadily, but there’s at least one part of that business that’s giving it a particular boost: kids’ sports.

Tournaments for sports ranging from basketball to cheerleading to volleyball are on track to generate about $285 million of revenue for convention centers this year, up from $226 million last year and just under $100 million in 2019, according to WinterGreen Research, which looks closely at youth athletics.

Business is surging in part because so many public schools have cut back on their sports programs, leaving travel teams and private clubs to organize athletic activities and attract college recruiters. Also, after the first few months of the pandemic, parents were particularly eager to find an outlet for their childrens’ energy, making sports clubs more attractive, said Jason Clement, chief executive officer of Sports Facilities Cos., which manages athletic and event facilities.

“As states began opening back up, the youth sports business didn’t just come back marginally, it came back like a tidal wave because there was pent up demand,” Clement said.

Youth sports are still a relatively small part of the convention center business, accounting for just 2.5% of overall industry revenue last year, according to WinterGreen. But in 2019, that proportion was less than 1%. The growth of these athletic events illustrates how convention centers will have to get creative to boost their attendance levels.

Any positives for the convention center business are good for investors in municipal bonds issued by the centers and related entities. State and local governments have been pouring money into these projects for years, because they can bring travelers to and generate more spending in a city. Cuyahoga County, Ohio is due to sell $30.6 million of revenue bonds this week to help fund improvements to a convention center complex in Cleveland.

Convention business activity in the second quarter was about 25.5% below 2019 levels, according to the Center for Exhibition Industry Research, which looked mainly at business-to-business events. That’s better than the second quarter of 2020, when the industry was all but dead. The group expects that the industry won’t exceed 2019 levels until 2024. High inflation has made many business travelers reluctant to resume going to conventions, according to Richard Schwam, a municipal bond analyst at AllianceBernstein.

In the case of youth sports, some convention centers are particularly reliant on that business. In Orlando, Florida, the Orange County Convention Center closed in the early part of the pandemic. Its first big event after that was the Amateur Athletic Union’s junior national volleyball championship in July 2020. From 2021 through 2022, sporting events accounted for 25% of the business at the Orange County Convention Center, more than double the percentage of 2017 through 2018.

In Atlanta, childrens’ sports typically represent 5% or less of the Georgia World Congress Center Authority’s total revenue each year, but during the 2021 fiscal year, that share increased to 8%.

“For all intents and purposes, girls athletics really became the event that propelled the Congress Center forward and really tested us operationally in being able to safely do events,” said Frank Poe, executive director at the Georgia World Congress Center Authority in Atlanta.

The recovery of the conference industry may seem slow, but it’s faster than was anticipated when the pandemic first struck in 2020, said David Smith, an analyst at S&P Global Ratings. It’s also faster by the standards of the last downturn: After the 2008 financial crisis, it took a decade for convention centers to fully bounce back, according to Cathy Breden, CEO of Center for Exhibition Industry Research.

Investing in sports would speed up that recovery, according to WinterGreen’s Susan Eustis.

“The youth sports market is high growth; it brings families together and it’s fun to watch,” Eustis said. “It’s found money for convention centers. They have massive amounts of space.”