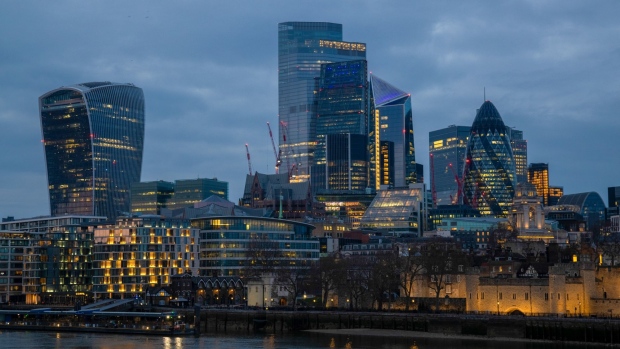 Skyscrapers in the skyline of the City of London, U.K., on Monday, March 8, 2021. Values in the U.K. capital should jump about 25% over the next five years, outpacing other European capitals, according to DWS researchers. Photographer: Jason Alden/Bloomberg , Bloomberg

The U.K.’s efforts to disentangle itself from sterling Libor by year-end just went up a gear.

Starting Thursday, firms should stop issuing new loans, bonds and securitizations tied to the discredited benchmark, according to the Bank of England. It’s ramped up the pressure in recent days, warning bankers that continued use is a risk for business and could cost them their bonuses.

The process will be closely watched in the U.S. where the Federal Reserve has given firms until year-end at the very latest to cease issuing any new Libor products. Britain’s cutoff will offer a test case about how to gradually phase out a rate that still underpins hundreds of trillions of dollars of global assets, from student loans and mortgages to interest-rate swaps and collateralized loan obligations.

“These milestones definitely help to focus market participants on transition,” said Kari Hallgrimsson, co-head of EMEA rates trading at JPMorgan Chase & Co in London. “It was successful in the sterling market and as a result I expect the dollar market to try similar methods.”

Britain has already made progress in retiring the London interbank offered rate, which has been tainted by manipulation scandals. The amount of outstanding bonds pegged to its replacement, the Sterling Overnight Index Average, or Sonia, is almost double that linked to the legacy benchmark. 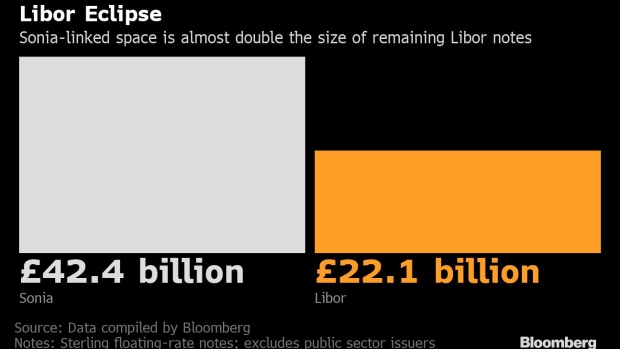 Regulators are hoping that number will rise as the ban on new debt kicks in, and are intensifying scrutiny to make sure there’s no slippage before the final year-end deadline.

“This is a transformational moment in the sterling loan market where Libor has played an integral part,” said Bobby Butcher, a managing associate at Linklaters LLP in London. “Whilst it probably won’t be the smoothest transition, market preparedness has certainly accelerated over the last two or three months.”

Since late 2019, new floating-rate notes and securitizations have been linked almost exclusively to Sonia, according to a BOE-backed industry group. Yet cash products still face challenges. Some firms have piles of old contracts that will struggle to make the change because they are so complicated and require consent from everyone involved.

The BOE’s guidance also says firms must, in most cases, cease issuing over-the-counter linear derivatives including interest-rate swaps from Thursday. Plus, it will begin reducing the amount it lends to banks using Libor-linked collateral in some programs, an effort to make it less appealing.

On derivatives, Britain is also far ahead of its peers. In February, trading activity pinned to Sonia stood at 46 per cent, with the remainder pegged to Libor. The U.S. Libor replacement, the Secured Overnight Financing Rate, or SOFR, is only at about 5 per cent. In the swap markets, Sonia volumes have regularly exceeded those on Libor since mid-2020.

The BOE’s move on Libor debt could put a further dent in the benchmark’s hold.

Similar changes are now coming in the U.S., where market participants are monitoring the U.K., according to Priya Misra, global head of interest rate strategy at TD Securities.

Since Wednesday, dealers should be quoting derivatives using SOFR rather than dollar Libor, according to the Alternative Reference Rates Committee, the Federal Reserve-backed body monitoring the transition. And from the end of June, firms should for the most part cease issuing new Libor-linked derivatives altogether.

“That’s fair but a really ambitious target,” Misra said. “It is a much bigger market in the U.S. so there are tons of legacy Libor hedging needs. I am hopeful that as SOFR usage picks up in the cash market, derivative usage will organically grow.”