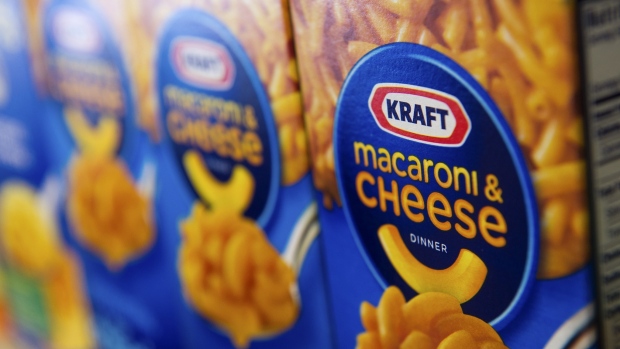 Kraft Heinz Co., the iconic food giant created in a merger five years ago, was downgraded to junk by two credit raters, raising fresh worries among investors that a slowing economy could threaten the broader corporate bond market.

The packaged-food company was cut one level to BB+ by S&P Global Ratings, following Fitch Ratings earlier Friday. It will now become a so-called fallen angel, taking it out of investment-grade indexes.

Though Kraft Heinz, with just under US$30 billion of debt, is a relatively small investment-grade issuer, it will become one of the top three in high yield. It’s just one of many companies that have wound up with a massive debt load as the result of deals, jeopardizing credit ratings in the process.

The food giant, created in a deal orchestrated by Warren Buffett and the private equity firm 3G Capital, is in the midst of a turnaround as its brands fall out of favor with consumers. It reported a drop in fourth-quarter sales Thursday that sent its bonds and stock tumbling, the latest sign that the company’s turnaround plan still has a long way to go.

“Kraft is to investment grade as Velveeta is to cheese,” said Christian Hoffmann, a portfolio manager at Thornburg Investment Management. “The ingredients dictate what something is and Kraft Heinz is junk.”

That assessment is a far cry from the days of the merger when 3G went on a high-profile cost-cutting spree that was expected to eventually produce fatter profit margins. Instead, Kraft Heinz was left with a stable of tired brands and few new products that could appeal to consumers’ preference for more natural and less processed foods. Last year, it wrote down the value of its brand portfolio by more than US$15 billion.

The turmoil has been a headache for Buffett’s Berkshire Hathaway Inc., whose stake over the past year has fallen to about US$8.9 billion, down from US$14 billion at the end of 2018. The stock was one of the worst performers last year.

S&P and Fitch cut the company one level to their highest junk rating. Kraft Heinz debt is already on the way to trading like junk. Its bonds due 2029 now yield about 3.5 per cent, compared to the 2.88 per cent for the average BBB company with similar duration. It’s the worst-performing issuer in both the U.S. and European markets Friday, and the cost to protect its debt against default has spiked to levels last seen in October.

Fitch said Kraft Heinz may need to divest a sizable portion of its business in order to reduce debt. Kraft Heinz also needs to cut its dividend, Fitch said in August, but the company said Thursday it would maintain the annual US$2 billion payout to shareholders. Fitch maintains a stable outlook, while S&P’s is negative. Moody’s rates the company one step above junk with a negative outlook as of Friday.

“We believe it’s important to Kraft Heinz shareholders to maintain our dividend during this time of transformation,” Michael Mullen, a spokesman for the company, said in an emailed statement earlier Friday. Kraft Heinz remains committed to reducing leverage “over time,” he said. The company plans to release a more detailed turnaround plan around the time of its next earnings report in early May.

Kraft Heinz was one of many companies with BBB ratings, the lowest level of investment grade, which now comprises half of the broader US$5.9 trillion market. It’s grown steadily since the financial crisis, as a decade of low interest rates prompted companies to load up on debt for mergers and acquisitions, often at the expense of credit ratings.

UBS Group AG strategists led by Matthew Mish predict there could be as much as US$90 billion of investment-grade debt to fall to high yield this year. That compares to just under US$22 billion in 2019, close to a 20-year low, according to Bank of America Corp. strategists.

But a wave of fallen angels, which some investors fear, has yet to follow. Many strategists contend that BBB companies have the ability to defend their investment-grade ratings, whether by selling assets or cutting dividends. Companies like General Electric Co. and AT&T Inc. have done just that to stave off downgrades.