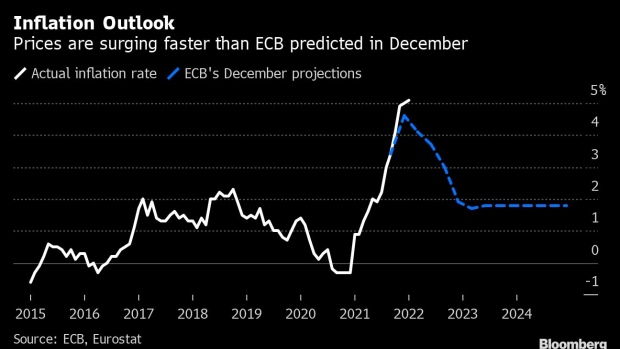 European Central Bank President Christine Lagarde’s message of calm amid the unfolding war in Ukraine masks how little policy makers know about how it will affect the euro-area’s economy.

The ECB chief on Friday said officials will do whatever is needed to defend price and financial stability. Yet while soaring energy prices due to the conflict will likely push record inflation even higher, they could also hurt economic growth just as the region emerges out of the pandemic.

Initial ECB estimates suggest Russia’s invasion may dampen economic expansion this year by 0.3 to 0.4 percentage point. A more detailed assessment is being prepared ahead of the Governing Council’s March 9-10 meeting. Before the conflict broke, that gathering was expected to decide on how fast the ECB could unwind its ultra-loose policy.

But the fast-moving military conflict now unfolding on European soil means a higher risk of forecasts being off the mark. Lagarde stressed that the ECB needs to remain flexible and keep its options open as it decides on the next steps.

“The ECB is closely monitoring the evolving situation,” she told reporters in Paris.

Financial markets are still betting that the ECB’s exit from unprecedented stimulus is on track. Traders are pricing a quarter-point rate hike by October. That’s because prices are already surging faster than expected.

Yet Europe’s economy could pay an even heavier price for its attempt to punish Russian President Vladimir Putin over his attacks on Ukraine.

The invasion has triggered a series of sanctions targeting the country’s financial sector and access to technology. EU officials are still debating further steps, with an ouster of Russian banks from Swift, the dominant messaging system behind global payments, being one of the steps under consideration.

For now, ECB officials are signaling that the Ukraine conflict may delay but not stop the central bank’s unwinding of ultra-loose monetary policy.

Executive Board member Isabel Schnabel argued that the inflation outlook has “firmed” since the start of the year and inflation pressures “have broadened and become more persistent.” Austria’s Robert Holzmann said Thursday the ECB was moving toward normalization, even though “it’s possible” that the speed may now be “somewhat delayed.”

Irish central-bank governor Gabriel Makhlouf said officials would probably be able to proceed with a decision on ending bond purchases, while giving themselves more time to decide on rates.

Lagarde stressed that the ECB has proved during the pandemic that it can act quickly and forcefully to unforeseen events. And while uncertainty about the economic outlook is reflected in financial markets, there are no signs of a “disorderly disruption,” she said.