One of my favourite TV personalities, Fareed Zakaria, hosts GPS on CNN. In recent weeks, he has taken on central banks and the bankers that “fixed” the world. Here’s why I think that while we are not out of bullets, the economy has become more bullet-resistant. I would encourage that you watch a few of the segments to get a more in-depth perspective on the issues.

Monetary policies are far less potent than they used to be and I believe it has everything to do with demographics. We make decisions about our future, in large part, based on our life stage and expectations of the future. I see it constantly on the questions we get here on the show and in my live talks across the country. The typical question goes something like this:

“I’m not getting a yield I can live on in bonds or GICs, can you recommend an ETF that gives me a better yield without more risk?”

Savers entering their retirement phase would like a safe “sleep-at-night” return. Historically, they could get it with a good quality basket of corporate and government bonds that had a nominal yield of about six-to-eight per cent and, most importantly, a real yield above two per cent. A real yield is what you earn after inflation erodes your future buying power. The price risk or volatility of the return path of a bond versus an equity is night and day different. The reason stocks have a higher longer-term real return is that the risk of losing your money is significantly higher in equity investing than debt investing. This is called the equity risk premium.

What they do not discuss is that the cost of the equity investment in terms of volatility of returns (the sleep-at-night factor) is three to four times what it is for the riskfree returns.

To illustrate my comments this week I used some charts from the flowing article on long-term interest rates. 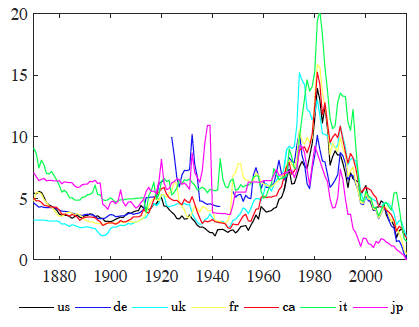 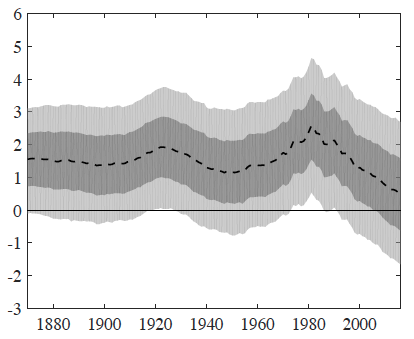 The real yield globally is basically zero or negative. Every bond in the world today that is issued and outstanding amounts to about 265 trillion dollars and has a yield to maturity of about 2.5 per cent. This includes some 10 trillion of negative yielding bonds. The global inflation rate adjusted for purchasing power parity is about the same number. The real yield of the entire world of fixed-income is basically zero. Bonds are amongst the worst investment on the planet. Why would anyone own a bond (or a GIC) when you know a year from now you will be worse off after tax and inflation (never mind cost of investment).

One of the main catalysts for why inflation has not been a problem is the aging demographic. It’s also the same reason why Fed policies will be far less potent stimulating growth in the future. In fact, the monetary policy tool is a massive wealth transfer from the savers to governments and corporations (the borrowers). The estimates are well into the trillions of dollars. Think about it, the 265 trillion of debt has about a two-to-three per cent lower rate than it used to. That’s 5 to 8 trillion annually that is less expense (more income) for governments and corporations than it is safer income for consumers. Monetary policy is flawed in this regard and the older we get, the worse impact it will have.

The average age of a North American is about 41 according to recent census data. Germany is 46, China is about 43 and Japan is 49. In the vast majority of the developed world, about half the world’s population and 75 per cent of it’s GDP is aging rapidly. At the same time life expectancy has been increasing due to globalization, technology, and tremendous breakthroughs in medical techniques and biotechnology. So in our formal retirement years, people need to live off their savings for about 20 years on average and up to 40 years at the extremes and that number keeps rising. Most people have not saved enough. You probably hear that a recent survey said 48 per cent of Canadians would have trouble raising $200.

Ask the 65 year old version of yourself the following question:

If interest rates get put to zero and I can buy more house/car (some large expensive item which require you to borrow money to do it), will you? Now think about the 25-year-old version of yourself and the answer may be quite different.

Fareed asked former Fed Chair Ben Bernanke about policy rates and tools going forward. U.S. President Donald Trump has been encouraging the Fed to lower rates and has tried to nominate governors that would help do his bidding.

Central banks absolutely need to be independent of government influence, but their policy tools are simply not going to work like they have in the past. We need to do a re-think on how we measure growth and look to stimulate GDP (C + I + G + X – M) because if you push interest rates lower, a retiree is at severe risk of not being able to meet their retirement financial needs in the traditional, safe way. This fact monetary policy is TOO BIG and it is FAILING. We aneed more public discourse about this issue as it will be a major problem for decades to come if we do not change the way we think. It’s leading towards failed governments and debt monetiztion ploicies.