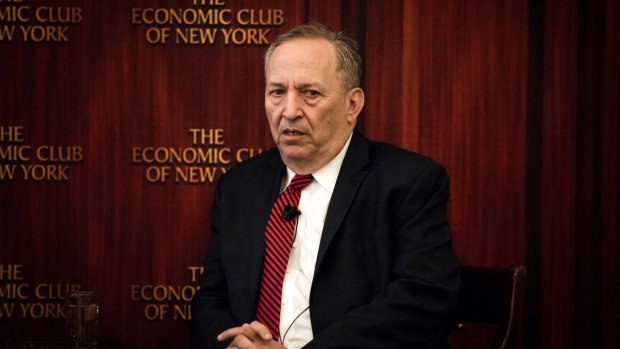 (Bloomberg) -- Former Treasury Secretary Lawrence Summers said the US jobless rate would need to rise above 5% for a sustained period in order to curb inflation that’s running at the hottest pace in four decades.

Fed policy makers raised interested by 75 basis points on Wednesday, the biggest increase since 1994. In their accompanying outlook, they signaled they see inflation easing from above 6% today to below 3% next year and near 2% in 2024. The median forecast showed unemployment rising to 4.1% by 2024, from 3.6% in May.

“The gap between 7.5% unemployment for two years and 4.1% unemployment for one year is immense,” said Summers, a Harvard University professor and paid contributor to Bloomberg Television. “Is our central bank prepared to do what is necessary to stabilize inflation if something like what I’ve estimated is necessary?”

The Fed on Friday said it would do what is needed to get prices under control, reiterating that price stability is necessary to support a strong labor market and calling its commitment to reining in inflation “unconditional.”

Summers repeated his prior calls that the Fed’s task of tempering price gains is similar in scale to that of former Chair Paul Volcker, who had to engineer a deep recession and double-digit unemployment 40 years ago to get inflation under control.

“The US may need as severe monetary tightening as Paul Volcker pushed through in the late 1970s early 1980s,” Summers said.

He said the central bank should move away from providing communication to the public about the likely future course of monetary policy.

“The return to humility, the abandonment of forward guidance as a policy tool is entirely appropriate,” Summers said. “It is likely to be necessary to make much more difficult choices than yet contemplated between acceptance of slack and acceptance of sustained, above-target inflation.”

“In that way, I fear we are going to have both elements of secular stagnation and secular stagflation,” he said.