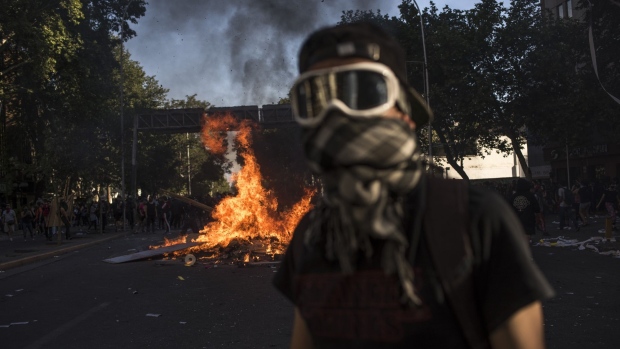 (Bloomberg) -- President Sebastian Pinera is forging ahead with plans to overhaul Chile’s pension system as he seeks to appease mass protests that have battered the economy and sunk his approval rating to a record low.

The government will send this week a bill to Congress requiring employers to contribute to workers’ individual savings accounts and also to a broader solidarity fund aimed at boosting pensions of the middle class. The proposal also increases competition among private companies, known as AFPs, that manage the savings accounts, Pinera said late on Wednesday.

Pinera’s announcement comes as his approval rating plunges to an all-time low of 6% after three months of demonstrations against inequality rocked the country. Improving pensions that sometimes fall short of Chile’s $400 monthly minimum wage has emerged as a central grievance among protesters. The president’s low level of support may give him no option other than heeding those demands, according to Claudio Fuentes, a political science professor at Universidad Diego Portales.

“The last survey confirms a demand for major transformations in conditions of living,” he said. “With an approval of just 6%, the government will have to side with groups that are more favorable to social reforms.”

Chile’s unrest erupted in October over a proposed increase in metro fares before ballooning into a much broader social movement. The prolonged upheaval has left over 20 people dead and dealt a severe blow to economic activity.

Chile’s current pension system was designed by Pinera’s older bother, Jose Pinera, and implemented during the Augusto Pinochet dictatorship. It obliges workers to deposit 10% of their wages in the AFPs, many of which are owned by foreign groups such as U.S.-based Metlife Inc., Prudential Financial Inc., Principal Financial Group Inc., and Colombia’s Grupo de Inversiones Suramericana SA.

If approved, the bill would allow both local cooperatives and nonprofit organizations to compete with those private companies. The entity in charge of the solidarity fund and also overseeing employer pension contributions would be run by the government.

“The reform will be warmly welcomed by most of the population, in particular the measures aimed at increasing competition in the management of current pension funds,” economists Francisco de la Cerda and Leonardo Suarez from financial services firm LarrainVial wrote in a note to clients. They added that the bill will be well-received “in light of ill feelings of a large part of society toward AFPs.”

To be sure, there was no shortage of criticism of Pinera’s proposal. One particularly contentious point of the proposal would require that AFPs pay back part of the commissions they charge in periods of negative returns.

“AFPs will become very conservative with their investment strategies to avoid having very bad months,” said Jaime Achondo, head of trading at financial services firm Fynsa. “In the long run that will result in lower returns and lower savings.”

Rolf Luders, an economist and former Pinochet minister, agrees that is a significant drawback of the proposal. Still, considering the months of unrest that have rattled the South American nation, he thinks it may be a relatively small concession to make.

“It occurs to me that it’s the price that you have to pay in order to reach an agreement,” Luders said via email.

--With assistance from Valentina Fuentes.

To contact the reporter on this story: Eduardo Thomson in Santiago at ethomson1@bloomberg.net