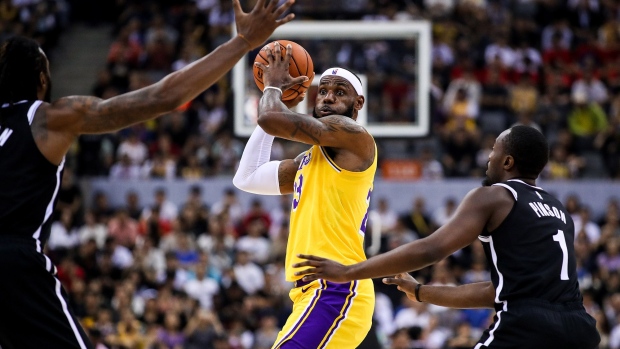 (Bloomberg) -- It was a reverse layup from LeBron James that really impressed basketball fans in Shenzhen on Saturday as his Los Angeles Lakers lost to the Brooklyn Nets for the second time this week in China.

But Lebron didn’t have anything to say after the game. The media sessions that are usually part of the preseason games were canceled, fallout from the tension between the NBA and China that was sparked last week by a tweet of support for Hong Kong’s anti-Beijing protesters by Houston Rockets General Manager Daryl Morey. Local sponsors withdrew their backing for the league and had their names removed from the court.

NBA Game Plan to Sidestep Controversy in China: Shut Up and Play

Fans cheered in the arena across the border from Hong Kong.

The Nets played without point guard Kyrie Irving and the Lakers didn’t have center Anthony Davis, who sprained his right thumb in the first quarter and didn’t return.