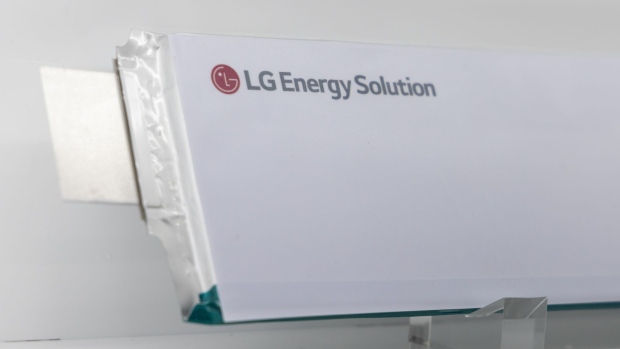 An LG Energy Solution Co. battery cell for electric vehicle (EV) at the InterBattery 2021 in Seoul, South Korea, on Wednesday, June 9, 2021. Global electric-vehicle battery sales more than doubled in the first four months of the year as the switch to environmentally-friendly cars gathers pace. , Bloomberg

Given “unprecedented economic conditions and investment circumstances” in the US, LG Energy is currently reviewing various investment options, the company said in response to a Chosun Ilbo report that it had decided to reconsider the project as construction costs have increased and amid concerns over weakening battery demand.

LG Energy had planned to spend 1.7 trillion won ($1.3 billion) to build a plant with 11 gigawatt hours of capacity in Queen Creek, Arizona, to supply cylinder-type batteries for EV startups. Construction was set to start in the second quarter with mass production scheduled for the second half of 2024, LG Energy announced in March.

A final decision whether to build the Arizona plant will be made after LG Energy consults with customers on how it can reflect cost increases in battery prices, Yonhap New reported, citing an unidentified source. The decision is expected to take at least one to two months, according to Yonhap. The company still plans to proceed with plants jointly owned with General Motors Co. in Tennessee and Michigan, Yonhap said.