Lithium miners are seeing investor interest go up in smoke.

The flow of capital into the cannabis industry is draining investments into lithium producers that supply the raw mineral key to power the electric-vehicle revolution.

Mining companies and analysts at the Lithium Supply and Markets Conference in Santiago this week said they couldn’t help but notice the half-empty rooms at the sessions — and the lack of investors and fund managers among attendants. The picture was remarkably different from last year’s event, when prices for the mineral used in rechargeable batteries were at historic highs. This year prices have fallen 17 per cent.

“A lot of the risk capital that had gone into the lithium sector is now running into cannabis," said Tobias Tretter, managing director at Zurich-based fund manager Commodity Capital AG. The lithium market “absolutely needs more investment, not just from car manufacturers or chemical companies but also from institutional investors and fund managers.” 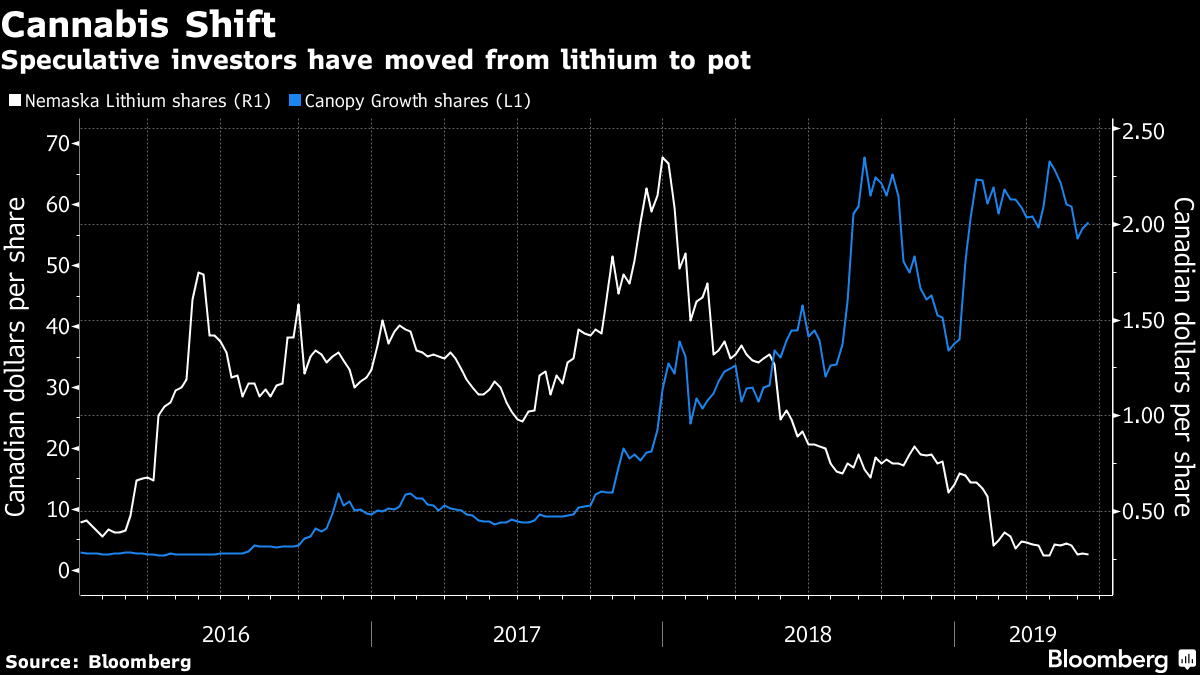 Lithium miners need billions of dollars in investments in order to expand production and to keep up with demand that’s expected to rise at double-digit rates in coming years, according to conference participants including Anthony Tse, chief executive officer of Perth, Australia-based producer Galaxy Resources Ltd.

While the market is slightly oversupplied at the moment, it is expected to remain tight, with demand set to reach one million tons per year by 2025, from about 325,000 tons last year, according to BloombergNEF.

About US$9 billion has to be invested across the lithium mining sector in order to add the 600,000 tons of new capacity needed to match demand in coming years, Tse said. The company operates the Mt. Cattlin mine in Australia and is developing a project in Canada and another in Argentina.

“Unless we start seeing meaningful slots of capital and checks being written for the sector, I see it very hard how you can get the amount of supply needed to meet demand,” Tse said during a presentation at the conference. “You can build all the EV factories that you want, but if you don’t have any of the raw material, you can’t feed that chain.”

The recent mega-deals between gold producers Barrick Gold Corp. and Randgold Resources Ltd., and Newmont Mining Corp. and Goldcorp Inc. brought hope that investors would return in greater numbers to mining stocks. But that money hasn’t made it into the lithium mining space, attendants at the conference said.

“The capital is firmly parked on the cannabis sector,” Chris Berry, an analyst at House Mountain Partners, said on the sidelines of the gathering. “As this speculative cannabis view matures, the hope is that that capital will come back to mining — but I don’t see a lot of money coming into the space for now.”

Quebec City-based Nemaska Lithium Inc. successfully raised $1.1 billion for its Whabouchi project in Canada last year. But in February the company announced it would need an additional $375 million to complete construction of the mine, saying it was evaluating several options. Shares plunged as much as 51 per cent following the announcement as investors saw it as a case in point for the lithium industry’s struggles to build new mines and supply the market.

“A lot of the speculative money has moved to cannabis and crypto-currencies,” said Wanda Cutler, Nemaska’s head of investor relations. “People have made very attractive returns there on their investments and I hope to see that money redeployed back into junior mining. We’re in a bit of a pause right now, but I do think interest will come back — it’s just hard to predict when."

The situation is slightly better in Australia, said Argosy Minerals Ltd. Managing Director Jerko Zuvela. The company, which has a lithium project in Argentina, raised US$9 million two months ago.

“It’s not as easy as it used to be,” he said on the sidelines of the conference in Santiago. “Maybe it’s not the medium-term investors you would like, but as long as you can keep the lights on you’re developing your project and getting closer to the day when you’re getting into production."