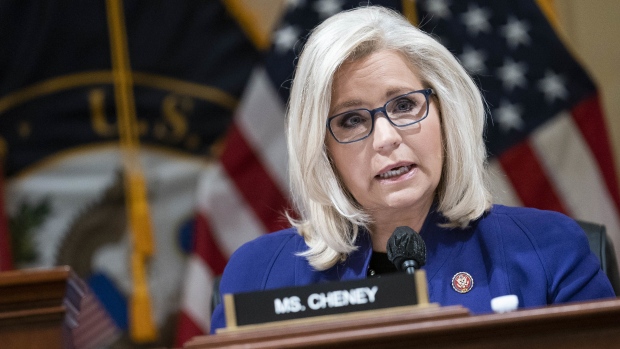 Representative Liz Cheney, a Republican from Wyoming, speaks during a business meeting of the Select Committee to Investigate the January 6th Attack on the U.S. Capitol in Washington, D.C., U.S., on Tuesday, Oct. 19, 2021. The committee probing the Jan. 6 riot at the U.S. Capitol is escalating its legal showdown with Steve Bannon with a vote recommending the full House hold him in criminal contempt for ignoring a congressional subpoena. , Bloomberg

(Bloomberg) -- Representative Liz Cheney’s political life is on the line in Tuesday’s Wyoming primary, but she is doubling down on rhetoric that has turned off the GOP base there: slamming Donald Trump’s legacy and calling his claims of a stolen election “a cancer that threatens our great Republic.”

“The lie that the 2020 presidential election was stolen is insidious,” Cheney says in a campaign ad released Thursday. “It preys on those who love their country. It is a door Donald Trump opened to manipulate Americans to abandon their principles, to sacrifice their freedom, to justify violence, to ignore the rulings of our courts and the rule of law.”

The daughter of a former Republican vice president, Cheney, who was once considered on the fast track for House speaker, has been ostracized by GOP leaders and voters alike for battling Trump and for her participation in the House panel investigating the attack on the US Capitol by a mob of the former president’s supporters. Trump has endorsed her chief GOP rival, Harriet Hageman, who had a nearly 30-point lead over Cheney among likely Republican primary voters in a University of Wyoming poll conducted July 25-August 6.

Cheney has not been deterred by her standing in the polls and her campaign has hoped to capitalize on cross-over votes from Democrats to buoy her chances in the primary. However, Jim King, professor of political science at the University of Wyoming, said in a Thursday statement that group is not particularly large.

In her ad, Cheney jabs Hageman and her other Republican primary challengers, without identifying them by name, for echoing Trump’s claims the 2020 presidential election was rigged.

That Cheney and her battles with Trump has come to shape her own legacy is clear. Cheney voted to impeach Trump and is the vice chair of the panel investigating the Jan. 6, 2021 insurrection at the US Capitol.

Aside from ads, Cheney has made few public campaign appearances in Wyoming. She travels with a Capitol Police security detail because of death threats directed at her, and mostly does tightly controlled visits in homes or other locations with groups of supporters.