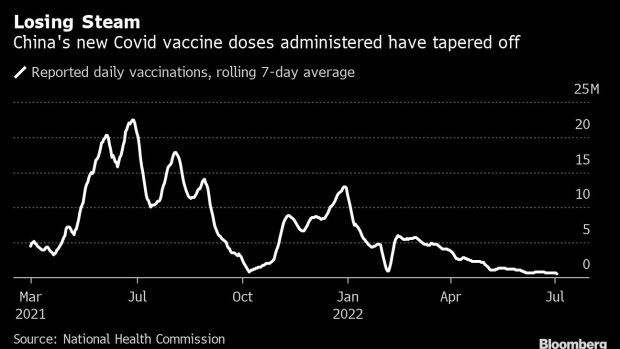 (Bloomberg) -- There’s been one consistent silver lining to Covid-19 outbreaks: they trigger a surge in vaccinations that provide protection against severe infections in the future. China’s elderly are an exception.

Take Shanghai. After the financial hub emerged from a bruising two-month lockdown and vaccination clinics reopened, the number of fully immunized people aged 60 or above increased just one percentage point to 63% in mid-June, despite hundreds of deaths.

By July 4, authorities said they had persuaded 70% to get at least a first dose. But scores of older people remain unmoved, like 62-year-old Rong, a diabetic retiree for whom the government’s position was far less convincing than conversations with friends, many of whom are unvaccinated. Cash rewards offered by his local residential community, a grassroots governing body that helps enforce Covid curbs and urges immunization, didn’t move Rong, who refused to provide his full name for privacy concerns.

“I’m worried I could just drop dead after getting the vaccine,” he said.

Recalcitrance among the country’s 267 million people over age 60 has become a serious factor keeping China stuck in its isolationist Covid Zero strategy. The low rates make it difficult to fully relax the country’s rules around mass testing, lockdowns and travel curbs that simultaneously protects the population, while leaving the economy at a constant risk of disruption.

“This will hold them back from reopening the economy, because they will always worry this group isn’t properly protected,”  said Chen Xi, an associate professor specializing in aging and public health at Yale University.

On the surface, China’s vaccination rate is world-leading: nearly 90% of its 1.4 billion people are fully immunized. More than half have received boosters. Even among those over age 60, the rate is above 80%. But it starts to drop sharply with age. A little over half of those aged over 80, the most vulnerable group, were fully vaccinated as of March. The government hasn’t updated the figure since then.

Older people’s vaccine hesitancy is leading to stagnation of the overall inoculation rate. Among the entire population, 89.41% were vaccinated as of June 27, little changed from a week earlier and up only slightly from 87.85% on March 17. Among those age 60 and older, the number was essentially flat at just over 83%.

Senior health officials have said their containment-at-all-costs approach is intended to avoid the mass deaths that all countries have seen, particularly among the elderly as reopening is underway, by providing more time for vaccination. But the lack of recent progress is raising the question of how - and when - China will be able to exit from the Covid Zero strategy.

When asked for comment, a National Health Commission spokesperson referred to remarks by Wang Huaqing, the chief immunization expert at the Chinese Center for Disease Control and Prevention, at a briefing in April. Elderly people who are on medication to treat chronic disease are still fit for vaccination, said Wang, but those who are experiencing an acute bout of disease should delay the shot.

In the US and Europe, in contrast, the most vulnerable are prioritized, beyond qualifying for vaccination.

Lack of specifics regarding who should get vaccinated in China leaves room for varied interpretations among health care workers. Some injection sites in China require blood pressure tests, and immunization is delayed in people with uncontrolled hypertension, local media reported.

Liu, a 66-year-old Shanghai resident who got a kidney transplant seven years ago, was told by his doctor not to get vaccinated because of possible complications, his son said. He takes daily medicine to prevent his body from rejecting the donor organ, and defers to his doctor on all health decisions.

“I feel there isn’t clear guidance on whether people with underlying conditions can get vaccinated, and under what specific conditions it should not be recommended,” his son said in an interview. “Still, I respect the doctor’s advice given my dad’s health problems.”

Frequent doctor-patient disputes at hospitals, an entrenched problem in China’s health care system, exacerbates the situation. Medical staff fear legal liability if there is an unrelated health scare in someone recently vaccinated, said Lu Mengji, an virologist at University of Duisburg-Essen in Germany.

“None of the stakeholders has the incentive to push for more elderly to get vaccinated,” he said.

The country’s success in controlling its outbreaks, despite significant economic and social cost, has also made it more difficult to sway the elderly. Residents have no pressing incentive to get vaccinated if Covid and its consequences are contained, making it less of threat.

China reported 380 infections for Sunday, after outbreaks in Shanghai, Beijing and Xi’an led to lockdowns and other restrictions this spring that millions endured. Many believe they’ll be fine if they stay home and avoid crowds. Nationwide, vaccination rates for the elderly have largely stagnated, rising just one percentage point to 83.4% at the end of June.

One 64-year-old retiree with the surname Wang said he didn’t fear an infection, predicting that it would cause a flu-like illness that would be easier to endure than a bout of his allergic asthma.

But Covid does kill, even in China, though the world’s most populous country does have one of the lowest death rates, according to official data. At least 500 people have died since the start of the year, mainly the old and infirm.

Wang, however, says getting a shot won’t fix his biggest fear: being sent to quarantine.

Authorities in China require everyone who’s infected and all their close contacts to be isolated in makeshift hospitals, often in poor condition, to stop the virus from spreading. While immunization reduces the risk of severe disease, especially for the frail and elderly, studies show it doesn’t prevent infection, which China’s Covid Zero policy is still fixated on.

The lack of trustworthy data on the safety and efficacy of domestic vaccines has also become a hurdle. Yale’s Chen said it took a lot of persuasion to convince his parents to get three doses of the shots available in China, all made by local companies. He’s also constantly fielding inquiries from friends about unfounded claims, including that it’s a carcinogen or can trigger diabetes or hormone disorders.

The government has done little to debunk such rumors. More than a year after a slew of domestic vaccines were rolled out, China has only published side effect information once, in May 2021. Questions also remain about how well they work, as most studies of the shots included few elderly people.

The country’s past vaccine scandals and lack of transparency in data disclosure also contributed to mistrust.

That’s why 60-year-old Zhu doesn’t want to be vaccinated. Many of her friends, who she said are senior managers at renowned Shanghai hospitals, refused them too, saying they weren’t confident about shots that were developed in such a short time and only used for two years.

Health officials are stepping up their push on elderly vaccination. In Shanghai, vaccines are being administered at senior care homes and older people ferried to clinics to encourage takeup, while cash incentives and insurance for “vaccination accidents” are being offered in Beijing.

But the Chinese government remains unwilling to make vaccination compulsory -- uncharacteristic of a regime that tracks people’s locations, gives them a digital color-coded health grade that can restrict their movement and sends travelers from cities with just a handful of infections into isolation. Officials also haven’t created mandates, common elsewhere, that would turn the unvaccinated away from restaurants and other venues.

Instead they have embraced testing, which is required to enter everywhere from hospitals to grocery stores.

“People will rush to get vaccinated when it’s required for entry to restaurants and shops,” Lu said. “If they had pushed vaccination the way they pushed people to undergo Covid test, China’s vaccination rate would have edged closed to 100%.”