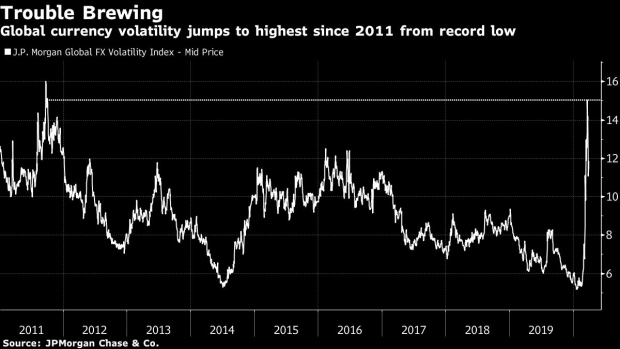 (Bloomberg) -- Investors are bracing for the most volatile end to a quarter in more than a decade, in part because many of them will have to handle this crucial period from home.

With international financial centers in lockdown, the usual occupants of dealing rooms and trading floors will be executing trades worth billions of dollars from domestic offices for the first time. While the threat of catching coronavirus lurks, slow WiFi connections, a lack of technical support and even the distraction of home-schooled children threaten to exacerbate price swings, adding another layer of uncertainty to an already tumultuous period.

“Our main duty has been being sure funds had at least 7% cash just in case,” Ricardo Gil, head of asset allocation at Trea Asset Management in Madrid, said at the end of an exhausting week of client calls and presentations. “Our main concern has been liquidity in fixed income where last week was impossible to find prices.”

Quarter-end is always a time of flux for banks and funds seeking to balance their books. Financials typically rein in collateral lending as they shore up balance sheets ahead of regulatory scrutiny, while fund managers rebalance their portfolios to account for changing asset valuations and to implement new ideas.

But with turbulence in debt, currency and stock markets near multi-year highs and rampant central-bank and government actions to avert escalating fears of a global recession, it’s a particularly bad time to be managing these flows from home.

The Global Foreign Exchange Committee, which oversees conduct for the $6.6-trillion-a-day currency market, warned that heightened volatility is likely in coming days, with larger-than-usual market flows to be expected due to the end-of-month benchmark fixings.

Meanwhile, JPMorgan Chase & Co. estimates that more than $850 billion is set to flow back into stocks to offset their historic slide this month. Much of that money could come out of bonds, which have benefited from demand for havens, potentially pushing yields higher and spurring an equity rally.

Responding to all that will be traders tracking assets from a single screen.

System crashes and access to the company’s IT helpdesk are some of the biggest challenges heading into this busy period, according to Rishi Mishra, a research analyst at Futures First, an India-based financial services company.

“You can get stuck in a position while the market moves against you or you fail to take advantage of an opportunity,” said Mishra. “I am not saying something like that has happened in the last few days but it’s something everyone’s trying to get ahead of.”

With glitches around a data release or an important speech meaning the difference between making or losing millions, some shops are trying to mitigate the potential for such outages by splitting servers. Traders that need fast execution get priority and those that can potentially get by with slower speeds -- like a sales team -- are relegated to a lesser bandwidth.

Reporting obligations for quarter-end are also making life harder. Some traders have been taking public transport to the office to so that they can log and record trades, according to Claude Brown, a partner at Reed Smith LLP, adding that this is stoking tension.

While the U.K.’s Financial Conduct Authority has signaled it will give temporary leeway on rules requiring them to record calls with clients, and the U.S.’s Financial Industry Regulatory Authority is also cutting traders some slack, a tangle of issues could still arise.

“Traders will often just be discussing things over the desk for market color in a way which is not recorded. Once those start taking place digitally that becomes subject to a recording obligation,” said Peter Bevan, a financial regulation partner at Linklaters LLP in London. “For traders simply to do their job and comply with regulatory obligations is a real challenge.”

And then there’s liquidity -- will traders working from home be able to provide the same market depth as they normally would? The signs so far aren’t encouraging, with liquidity droughts showing up in long-dated government bonds, Treasury inflation-protected securities and futures markets.

That could prompt some uncomfortable conversations with clients, if they decide to pull their cash when executing their orders is particularly difficult.

Fund managers have various mechanisms at their disposal to protect against a cash shortage, including “gating” -- temporarily blocking fund withdrawals -- but the reputational hit puts this at the extreme end of their arsenal.

Still, there’s an upside to working from home. For Investec Bank’s Julian Rimmer, the anxious hum of the London trading floor has been replaced by the operatic strains of Puccini. And, waking a full hour and 45 minutes after his normal 5 a.m. get-up to travel into the City, the emerging-market equities trader gets to see more of his family.

“The only difficulty is the actual lack of verbal communication which flies around the desk usually,” he said. “It’s much faster to shout to a trader.”