Strong U.S. jobs data is a sign that things are getting back to normal: Economist

Job openings in London’s finance industry almost tripled in June from a year ago as the U.K.’s imminent exit from COVID-19 restrictions stokes optimism about the economy.

There were 3,330 jobs available at the end of last month, the highest level since January 2019 and up 192 per cent from June 2020, according to data from recruitment firm Morgan McKinley published Friday. The past three months have been the busiest for new postings since the third quarter of 2019. 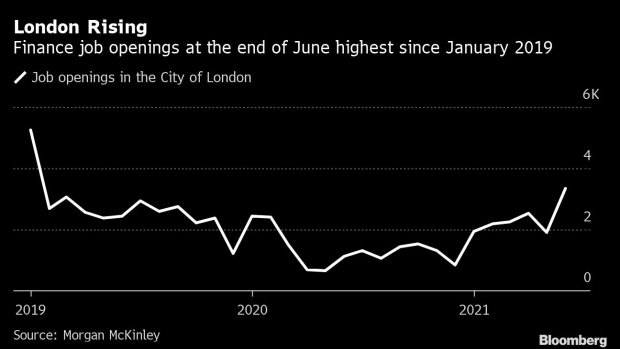 Despite the uptick there will still be plenty of competition for those roles. About 14,000 new job seekers entered the market in the second quarter, according to Morgan McKinley.

There was also a 49 per cent year-on-year increase in job seekers as the market starts to recover from more than a year of COVID-19 disruption.

The job data comes after a Confederation of British Industry and PwC poll of banks, insurers and money managers was published Thursday, which showed optimism among U.K. finance firms rose for the fourth consecutive quarter.